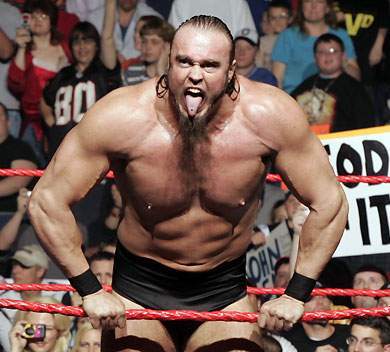 Kicking off the first of three shows this weekend (one being a make up from last weeks’s snow-out in Madison), National Wrestling Superstars invaded Bergen County’s Dumont High School with lots of thrills and excitement that had the crowds on the edge of their seats from the opening bell.

The opening contest saw NWS Cruiserweight champion Joey Janella retain his coveted title against former champion J.D. Smooth. Smooth, who has complained to anyone who would listen about not getting a rematch, did get the match he wanted but the results weren’t as planned as Janella pinned him in the middle of the ring for the 1-2-3

The next match saw a new team put together by NWS, Nikko the Flying Monkey and Kong-Go-Rilla take on the undeated 800 pound team known as the Nigerian Nightmares. Monkey Business started off imitating the Nightmares only to find themselves at the end of their own Nightmare as the team from Nigerial totally destroyed their opponents, hitting the move they call “throwing a man under a bus” for the finish and the win

Match #3 saw Luchador Manual “Manny” More take on indy standout and former OVW star Damian Adams. These two matched each other move for move for almost 10 minutes before Adams caught More by suprise and went for the pin. As the referee went for the count of 3 the time limit expired and the bout was called a draw

Match #4 saw Kevin Matthews, escorted to the ring by New Milford’s own Mo Sexton (New Milford and Dumont are rivals in school sports) take on former WWE star and hall of famer Tito Santana.  Matthews, with the help of Sexton looked like he would get a decisive win over the WWE legend, but after Tito came back with his patented Flying Buritto, he was able to score the pin. However, it wasn’t over there as Nicky Oceans, Danny Demanto and Corey Havoc stormed the ring and joined Kevin Matthews and Mo Sexton in beating down Tito before The Famous Clown, The Patriot, Pastor George and Snitsky came to the ring for the save.  Snitsky told fans he had an open contract where the loser had to be put through a door and he challenged Sexton to a match right then and there, but alas, the match would have to wait as it was time for Intermission.

Match #5 was a 6 man tag team match with America’s hero (and Dumon’t newest resident) The Patriot joined by Pastor George and The Famous TV Clown as they took on The Commandos (Danny Demanto and Nicky Oceans) and NWS heavyweight champion Corey Havoc who were all managed by Brittney Savage.  This match was a battle of strength vs cheating as the Commandos used their dirty tactics and had Savage assist them in keeping their opponents on the mat. After nearly 15 minutes, The Patriot caught Havoc in a full nelson slam for the win.

The Main Event saw Snitsky with local managers from Dumont High School take on Mo Sexton, who was accompanied to ringside by Kevin Matthews. The former WWE star Snitsky and the local star Sexton battle each other with power moves and both could have easily secured victory had it not been for outside interference by both managers and Matthews. After 12 minutes of hard fought battle, Kevin Matthews distracted the referee and Matthews Commando partner, Danny Demanto went into the ring and hit Snitsky with a chair then quickly disappeared, allowing Sexton to put Snitsky through the table.

Ah, but Commissioner Gino Moore saw the finish and said while he could not reverse the referees decision, he could do something about it in the future and ordered a rematch, this time a Loser Goes Through A Table Match, between Sexton and Snitsky on Friday night, May 21st at the nearby Bergenfield Knights of Columbus. In addition, he told Demanto and Matthews that they better come prepared to battle as Commandos because they were going to have a match in Bergenfield against the Nigerian Nightmares.