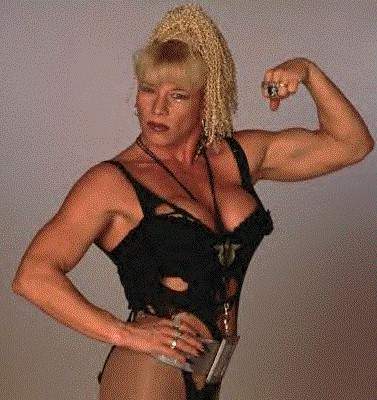 A Short Piece On The Late Luna Vachon
From NWS Management

Many have already written about the passing of one of pro wrestling’s more entertaining and bizarre characters in Luna Vachon. National Wrestling Superstars would like to add their two cents’ worth at this point, and we need not dwell on the apparent negatives that caused her young demise, but rather on the positives, which should be a lesson to all in the industry, especially to the distaff side who, at times, have become somewhat reluctant to do whatever it takes to put a particular show or promotion over.

Both Gino Moore (a.k.a Commissioner Gino), who knew Luna way longer than myself (Johnny Falco) and affectionately called her “Angel” as only her close friends did, will certainly miss her presence. I had a different rapport with Luna as a booker, and I can tell you for a fact that at the shows, Luna was always wiling and able to do whatever it took that particular night to enhance the show’s creativity, something that I have noticed of late that some of the female members of this sport seem to not want to partake in. I can tell you that Luna always worked hard as opposed to some of so-called latter-day female performers not even breaking a sweat at times, yet were always there at the end of the night with their hand out at the pay window. This is not to condemn any of the lovely females, and there is only a small faction that we are bringing this matter to light to, just to open their eyes to what it takes to break out of the local independent show scene and hopefully to the big time at some point.

But back to Luna… there are countless outrageous stories I’m sure, but I remember two that particularly stand out. One was five years ago when the NWS had a three-day weekend full of double shots, culminating with a booking at a Halloween haunted hayride in central Jersey on a Sunday night. How appropriate Luna was there, especially when the moon was full, as Luna just went hog-wild, attacking anything and anyone in sight, but all in good fun, as the setting was so ridiculous, being part barn and part outdoor theater, with haystacks, rain, and mud everywhere, everyone broke character in front of a somewhat miniscule turnout, as the bizarreness of it all was too much to handle.

The second Luna story I recall was not from a wrestling show per se, but a three-way phone conversation between Luna, myself, and the so-called promoter of a now defunct promotion once known as SSCW, the much maligned Carmine Sabia. It seems Carmine had Luna booked along with NWS on a shared weekend, and, what has become the unfortunate usual practice of Mr. Sabia, something of course happened and went awry with Carmine’s part of the booking. Well I can tell you that Luna laced into both of us verbally with the most salty language that ever came out of a female, language that would have made sailors, dockworkers, and construction workers cringe. At the end of the tirade, which lasted some time, both Carmine and I asked Luna not to hold back and let us know how she really felt. At that point Luna`s conversation broke down into total laughter on her and our parts.

Well, as far as this promotion is concerned, Luna will be missed, and as her close friends called her “Angel”, we know that’s who she`s with right now.