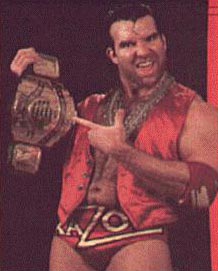 NWS management would like to make the following statement regarding this past weekend’s Scott Hall appearances. . . . Not that Scott Hall needs to get his name any more known in the pro wrestling world but it’s nice that a major Northeast promotion can send out a most positive feedback on Mr. Hall’s appearances.

NWS was contacted by an unnamed third party that Mr. Hall would be in the greater New York/New Jersey metro area on other business and would possibly like to make an appearance on our Friday night Carteret, NJ event featuring Sean “X-Pac” Waltman. We welcomed the invite but of course cautioned that the event was at a church gym and on the other upside option on Saturday night at a high school gym and knowing of Mr. Hall’s recent unfavorable press, we were somewhat leery of possible repercussions. But this press release is of a positive nature because of when the negatives are reported, so should the positives.  Scott Hall’s appearance was electrifying (to say the least) on Friday night, and his locker room presence and welcome input in the main event match was totally unexpected (to say the least).  Scott got right back into the swing of things and jumped right into the middle of the match between X-Pac and Monsta Mack even to the point of giving the Razor’s Edge Power Bomb to the over 350 pound Monsta Mack and leading him and Sean out of the ring in victory and a long line of autograph seekers that lasted a good half hour.

The downside, Scott, who has an uphill battle beating the demons that have effected him in the past and is on the road to recovery re-injured himself and was in notable pain. On Saturday night, before a good sized Bloomfield (NJ) High School Gym crowd, there to see Gene Snitsky, George The Animal Steele and the rest of the NWS stars, Scott, who was not advertised (as in Carteret), but just rumored to show up, was nowhere to be seen.

But low and behold, just before intermission, a visibly injured and hurting Scott Hall conjured up the strength to not disappoint and made it to the locker room area and in time for the surprise intermission announcement “and here he, Da Bad Guy Scott Hall” and make the grand effort to climb the ring steps to take center ring with the proverbial quote “hey yo” as on Friday Night had the crowd going wild.  Scott spent intermission in a much needed seat greeting all his many fans.

Scott’s presence, not only in the arenas, but in the locker room on both nights was a positive thumbs up to all and NWS management and staff would like to thank Scott for honoring us with his presence along with the other superstars on the events, George The Animal Steele, X-Pac, Patriot, Gorgeous George, Gene “Its Not My Fault” Snitsky and all the NWS cast and crew for pulling off another great weekend of top notch entertainment for not only the sponsoring groups, but the wrestling public alike.  We wish Mr. Hall much future success with his ongoing business ventures