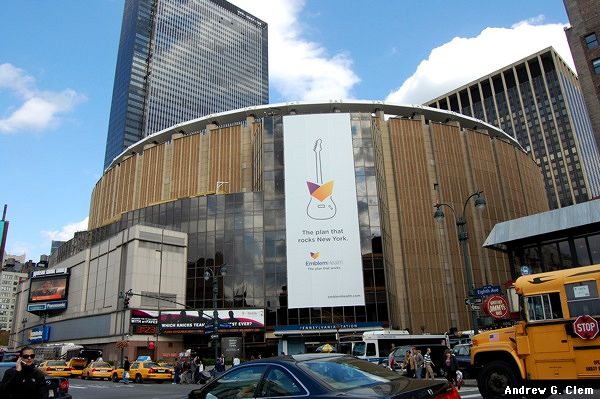 The New York Times reports that the current building housing the world famous Madison Square Garden arena will cease to exist in 10 years.

New York City Council voted on Wednesday (47-1) to extend the Garden’s special operating permit for only 10 more years before the venue shuts down to make way for the extensive renovations to Penn Station (and the surrounding neighborhood), which is housed below the arena.

James L. Dolan, who controls the Garden, was pushing for the permit to be extended in perpetuity, while Mayor Bloomberg’s administration had been pushing for a 15 year extension.

Madison Square Garden has been located at it’s current location for 45 years. This is the 5th location for the “World’s Most Famous Arena” since it opened in 1879.

“This is the first step in finding a new home for Madison Square Garden and building a new Penn Station that is as great as New York and suitable for the 21st century,” said Christine C. Quinn, the City Council speaker. “This is an opportunity to reimagine and redevelop Penn Station as a world-class transportation destination.”

The Garden is still in the process of a $968 million renovation, which will be finalized this fall.

“Madison Square Garden has operated at its current site for generations, and has been proud to bring New Yorkers some of the greatest and most iconic moments in sports and entertainment,” Mr. Dolan’s company said in a statement issued Wednesday afternoon. “We now look forward to the reopening of the arena in the fall of 2013.”