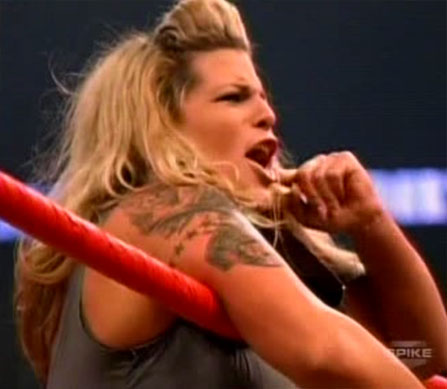 O.D.B. DISCUSSES HER SURPRISE DEPARTURE FROM TNA, WHETHER SHE’D RETURN, A PG O.D.B. IN WWE, AND MORE By WorldWrestlingInsanity.com

How does ClubWWI.com follow up our previous interview with Awesome Kong –  one of the most memorable TNA Knockout Champions ever? With another. That’s right.  It’s one dirty shoot with One Dirty Bitch as the one and only O.D.B. joins the Insanity. Bammm!

From Tough Enough to OVW to TNA, ODB has been making a name for herself wherever she rested her flask. Now, in one of her few interviews following her TNA departure, everyone’s favorite B-Word joins James Guttman to talk about everything from the origins of the O.D.B. name to the rapper “ODB” to a discussion about the 1987 WWF Slammy Awards (seriously)  This is one interview that you won’t want to miss.  For a full list of topics, head to: www.worldwrestlinginsanity.com

O.D.B. is a star that many fans will never forget.  As a long time fan, Jessica Kresca first tried out for Tough Enough in 2001, making the top 25.  She shares stories of that audition process including using the name “O.D.B.” there and delivering a timid promo in character, Al Snow’s memories of her appearance, and more.  Eventually this lead to her time in Ohio Valley Wrestling, which saw Jessica win the Women’s Title.  She talks to James about the timing of her OVW run and how she showed up there at the exact right moment.  By her own words, the experience she gained in OVW lead to her TNA run which many fans will never forget for her wild antics.  JG asks about her surprising departure from Total Nonstop Action.  It always seemed like the company was constantly changing creative directions.  Is this something she noticed when she was there?  O.D.B. explains the situation to ClubWWI.com members…

“Yeah.  I was noticing stuff toward the end.  In any situation, you kind of know when it’s going to be your last time there and I kind of knew my end was coming soon.  I love TNA and thank them for getting me out there and stuff.  But I kind of knew it was time to step away for a little bit.  Kind of recharge my battery and I just wasn’t happy there.  It wasn’t no one’s fault but it was just, you know, me kind of taking a breather.”

Despite leaving the company, Jessica still has good things to say about TNA.  She speaks about the revolving agents for the knockout division, her favourite ones, and more.  During the ClubWWI.com interview, James asks if returning is something in the cards for the O.D.B.  She responds…

“Never say never in this business.  It’s, uh, you never know what’s gonna happen. I take it day by day for now.  Right now, I kind of want to focus on my acting career.  I don’t have one yet, but you know. (laughs)”

O.D.B. goes on to discuss her time in TNA, the leeway some people are given for their material, winning the New Years Eve Impact Knockout Tournament, what she wishes TNA had done with her gimmick before she left, grabbing her boobs, having a different look, and more.

Speaking of leeway, many point to that leeway as the thing that let her character flourish in TNA.  WWE, on the other hand, has less of that with more focus on families.  Could we see a PG O.D.B. in WWE?  She talks about it on ClubWWI….

“Oh yeah.  I’d have to clean myself up.  A little PG version of ODB.  Not a lot of wrestlers get to be themselves.  So TNA did let me do that.  They were like, ‘You know what?  Do your thing girl.’…But you never know if O.D.B. can clean up and become P.G.  You never know where I might be popping up.”

Jessica “O.D.B.” Kresca’s interview with James Guttman covered a ton of ground from her early days of playing Ice Hockey to her memorable moments in TNA to the lack of Indy female talent lately, she speaks out on it all.  Be sure to follow ODB on Twitter… http://twitter.com/theodbbam