Home / Indies / Order “When Wrestling Was Rasslin” by Peter Birkholz – all proceeds go to charity!

Order “When Wrestling Was Rasslin” by Peter Birkholz – all proceeds go to charity! 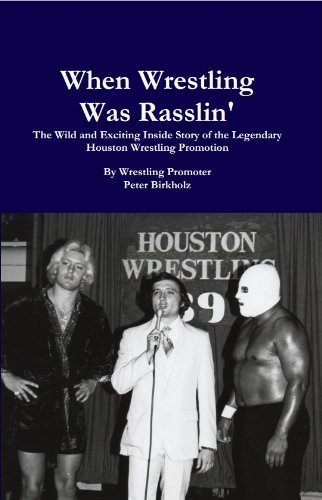 WHEN WRESTLING WAS RASSLIN

Birkholz, the nephew of legendary Houston Wrestling promoter Paul Boesch, writes about his childhood memories and experiences growing up in a professional wrestling family. He then gives a great historical narrative on the world famous Houston Wrestling promotion. Throughout the book, Birkholz tells numerous stories, many of them first hand, about the superstars and legends during the decades when the professional wrestling business was operated by territorial promotions.

The book is jam packed with stories from inside the ring and also behind the scenes events. The reader will not only enjoy the entertaining stories, but will also learn what it was really like promoting wrestling during that golden era. He writes about what it was like to work with such legends as Gorgeous George, Buddy Rogers, Lou Thesz, Ed “Strangler” Lewis, Andre the Giant, Fritz Von Erich, Paul Boesch, Ernie Ladd, Wahoo McDaniel, Ric Flair and all the others.

Birkholz wrote the book as a labor of love to help preserve the rich and colorful heritage of the era of territorial promotions and also to raise money for charity.  The book is a must read for all good wrestling fans and also makes a great gift for the wrestling fan in your life. The book is available on Amazon.com and also in the Kindle version. All profits will be donated to charity. Order your book today!