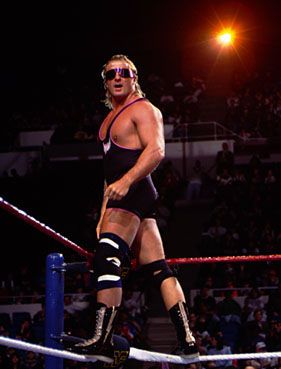 The show opened with Smith Hart. Smith said that he feeled that Owen hadn’t reached his prime when he passed. He spoke about a rib that Owen did on Davey Boy Smith. Davey was taking an early flight back to Florida (where he lived at the time), and gloating about leaving early. Owen took it upon himelf to lock Davey Boy’s bag to a locker with a padlock while he was showering, causing him to miss his early flight. But that wasn’t it: Owen convinced the flight attendants that Davey Boy was a groupie, and had him escorted back to his seat.

The interviews becan with a prerecorded clip with former WWE referee Jimmy Korderas. Korderas spoke of a story when his credit card was rejected at a hotel. Someone called him from thelobby to alert him, so he put shorts and a tshirt on to go downstairs and straighten the situation out. When he got to the lobby, the employees had no idea what he was talking about! He said it was Owen calling him and posing as a hotel employee. He said if the fans could remember oh for one thing about Owen, its that he was just an average guy, who nobody is able to say anything negative about. Jimmy said that the best advice Owen ever gave him was to take care of his family, as family comes first.

A caller said his favorite Owen memory was the DX skit on The Nation when Jason Sensation parodied Owen.

Koko B. Ware called in and spoke about teaming with Owen. Smith said he thinks of Koko as a brother. Koko spoke about Owen’s ribs, mentioning that Owen never did a “dirty” rib Nobody ever got hurt. Koko says Bret and Owen were the only Harts he got close to, even though he knew them all. Koko said if he could say one thing to Owen, it is, “Man, I love you.” Kiko said if he wrote a book about Owen, it would be called “He did it his way.” Koko was getting very emotional speaking about Owen. Smith said he was very touched by what Koko had to say.

A caller remembered the Dan Severn storyline. He asked if Steve Austin and Owen reconciled their differences, and Smith believes they did.

A caller named Frankie from New York said his best memories of Owen were of him winning the Slammy and becoming the King of Harts. He remembers vividly watching the PPV during the accident.

Smith spoke about Owen vs. Bret at Wrestlemania X. He said anytime anyone in the family was involved with a big event, they tried to make it to the event.

Sean Morley called in. He said you always expected something funny out of Owen. He remembered a stry when they were waiting in line at a hotel, when people asked for autographs. Someone had a huge stack, but Sean only signed one. When he got to his room he got a call from that fan saying he said hed sign them all and he wanted him to come down to do it. Morlet came down angry, but the fan was nowhere to be found. 6 months later, Edge clued him in that it was Owen. He said Owen was just about having a great time in and out of the ring. Morley said Owen’s inspiration on him was that he can work a fun match without stressing about it. If he could say one thing to Owen, it’s that he loves and misses him. Sean says that Owen taught him that being in the ring isnt as stressful as its made out to be. If he wrote a book about Owen, it would be called “Owen’s Playground: The Squared Circle.”

A prerecorded interview with Bill Apter of www.1wrestling.com played. He says Colin Raye, the country singer, is a wrestling fan, and more importantly was a huge Owen Hart fan. It turns out that Owen’s favorite song was Raye’s song “One Boy, One Girl.” That song was used on the A & E Biography about Owen Hart. Apter said if he could say one thing for Owen that his fans would want to know, it’s that he had a great sense of humor. Collin Raye even sang at Owen’s funeral.

The Godfather (Charles Wright) called in. Charles said he remembered Owen for simply being a great guy. He said Owen never ribbed him. He says his last thought of Owen was that he wishes they could have had that last match.

Listener Joe Young called in. He said that Owen meant the world to him, he even named his son Owen after him, He says Owen is the reason he got into the business.

A Vito LoGrasso clip played.. Vito said Owen was the most loving family man youll ever meet. Vito reminisced about wrestling him in the early 90s as a WWE enhancement talent, Vito felt Owen took care of the young guys, as well as everybody else. Vito said Owen never ribbed him, but he remembers the gravy train. Gravy train is when you fill someone’s bag with dog food, water and then shake it up. Vito thinks Owen’s fans should remember him for his smile, personality, and his good nature.

Caller Jay Simola called in with his memories of how Owen’s death and the tribute show where the curtain was raised and you saw real life for the first time, changed his view on wrestling, Jay said Owen taught him how to be a good father, and made him realize how precious time and human life is. Jay was very emotional while speaking.

The guys played Gary Wolf’s prerecorded thoughts about working in Japan with Owen. Gary spoke about all Owen did for him and how his family always came first. He spoke about Owen always cracking jokes. Gary said he will neevr forget Owen. He told the stiry about the one rin that Owen did on him. He put his boots on, and they were superglued to the floor, and he had to wrestle without them. Owen taught him to save as much money as possible. Owen also taught him that you have to take care of your family. Gary says Owen was a technical genius of a wrestler. Bret became the best from working with Owen, Bulldog and Dynamite Kid. Haid the last thing he would say to Owen was thank you

An interview with Clarence Mason played. He remembered a rib when he rigged a door with a bucket above the door full of water. The victim turned out to be Undertaker. Clarence remembered a Slammy Awards where Owen pushed a waiter there so everything would fall, and it fell on Vader. He said Owen just wanted to help him as he was new to the business. Owen was very comfortable where he was and didnt worry about his “spot,” no matter where it might have been. Clarence said Owen was an inspiration to him by showing him where he needed improvement and mentored him (yes, Owen could be serious). Owen taught him that anything left than perfection is not good enough.

The prerecorded interview with Bill Alfonso was played. Bill said he was a great worker who knew the business. Fonzie shared astory about Owen and he traveling in Los ANgeles around the time of the 1992 LA Riots. Fonzie said he didnt get ribbed out of respect. He said there’s not just one thing that Owen could be remembered for. He said the most rewarding thing about knowing Owen was being dependable. Alfonsos book title if he wrote a book about Owen would be called “One Of The Greats.”

JT gave his memories of Owen. He idolized Owen.

Missionary said how sad it is that someone who is so special to so many people is no longer around. He said Owen never failed to impress anyone who watched.

Viper called in and said Bret vs. Owen was one of the most techically impressive matches in history. He said Owen made him appreciate the technical aspect of the business.

A caller called ina nd said that Said Owen was one of the nicest people he ever met. He and his father were confused as to what was happening when the accident occurred.

A personal friend of Owen’s called in. He reminisced on the beginning of their friendship, traveling with Owen, he was traveling with owen during feud with Bret. He said they got pulled over by a state trooper during that time, who stopped them and said “You betrayed your brother,” and asked for an autograph.

RIP Owen Hart you will always be remembered.