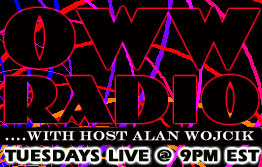 If you missed Tuesday August 24th edition of the Online World of Wrestling Radio with host Alan Wojcik, here are the highlights:

***Alan paid tribute to former southeastern star “Nightmare” Ted Allen and former WCCW manager General Skandor Akbar. Spug & Mase from Wrestle Talk Radio were joined on the program by Doc Pepper of No Holds Barred (www.xtremenetworkonline.com) to break down Monday Night Raw and Friday Night Smackdown, help celebrate Vince McMahon’s 65th birthday, a recap of TNA Wrestling iMPACT, the decision to remove the TNA World championship from Rob Van Dam and who will win it at Bound for Glory in October, the release of “Notorious 187” Homicide and the happenings in Ring of Honor.

***Lucha Libre USA: Masked Warriors star RJ BREWER joined the program via pre-taped interview where ALL questions were pre-screened by the AZ Governor’s office. Brewer spoke about his mom’s legislation, his time in Ring of Honor, the retirement of ECWA promoter Jim Kettner plus his current role in Lucha Libre USA. This Saturday the promotion holds an event in Charlotte, NC at the Bojangles Coliseum. Log onto www.LuchaLibreUSA.com for event and ticket information.

You can also get this and other past shows, at www.clickwrestle.com/podcasts/owwradio. ClickWrestle Video On Demand is also home to thousands of matches from around the globe. The show can also be found on iTunes http://itunes.apple.com/us/podcast/oww-radio/id334739148?ign-mpt=uo%3D4. Best part its FREE!!

Online World of Wrestling is produced by Wild Talk Radio, www.wildtalkradio.com which is the home to the following outstanding programs, all times are Eastern:

Coming soon: The History of… with Tim Stein and the return of Fire on Ice (NHL talk)