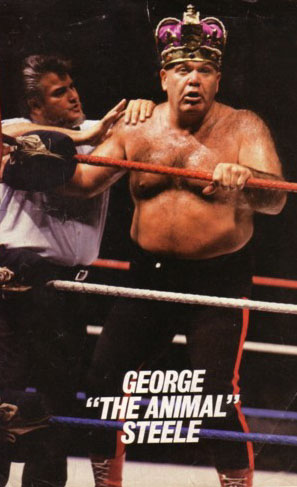 If you missed the Tuesday January 4th edition of the Online World of Wrestling Radio with host Alan Wojcik and contributors Phi strum of the Poughkeepsie Journal, Wrestle Talk Radio/Otaku Talk Radio’s Spug & Mase, here are the highlights:

HUGE EXCLUSIVE INTERVIEWS WITH
GEORGE “THE ANIMAL” STEELE
AND
BRUTUS “THE BARBER” BEEFCAKE!

You can get this and other past shows on ClickWrestle.
All of the OWW Radio shows can also be found on iTunes

Alan announced the beginning of a weekly segment called “WrestleMania Memories” that will take place until WrestleMania 27 in Atlanta. Each week Alan & the contributors will recap the previous 26 mega-events and hopefully speak with a WWE legend about their career and what they would consider their WrestleMania moment.

Our 100% free to the listeners’ interview guest #1 was former WWF Tag Team champion and one half of the Dream Team, BRUTUS “THE BARBER” BEEFCAKE. Mr. Beefcake told stories on the birth of his character and reincarnation into “the Barber” at WrestleMania 3, being told of the concept of WrestleMania I in NYC, his favorite WrestleMania moment,  being on the Barber Shop show the day the Rockers broke up, working with Greg “the Hammer’ Valentine and the hazards of traveling internationally with Andre the Giant. Mr. Beefcake’s booking agent VINNY THE GUIDO also stopped by to reminisce on his favorite WrestleMania moment.

The Dream Team will be appearing in Pennsylvania at a Knights of Columbus event on January 7th and will take on Double Deuce Social Club (Francisco Ciasto & Pete Cannon) at Vintage Wrestling’s WrestleBrawl 2 in Sanford, FL on January 15th. Log onto www.wrestlingvintage.com or http://www.facebook.com/topofthelinetalentbookings for how you can book Brutus Beefcake for a wrestling or charity event.

Our 100% free to the listeners’ interview guest #2 was WWF Hall of Fame class of 1995 member and wrestling legend JIM MYERS AKA GEORGE “THE ANIMAL” STEELE who spoke with the panel for one full hour. This interview must not be missed since Mr. Myers DOES NOT normally participate in interviews. Mr. Myers spoke about how he became “the Animal”, working with legends like Bruno Sammartino, Bob Backlund, “Superstar” Billy Graham, Andre the Giant, the Sheik (Sabu’s uncle), the creation of his green tongue, his fuzzy 80’s friend Mine and much more that you must hear right now!

For information on what Mr. Myers and “the Animal” are doing today as a motivational speaker and the ministry, log onto his official website, http://www.georgetheanimalsteele.com/

With Spug freaking out of his Ohio State Buckeyes performance in the Sugar Bowl, Phil Strum joined the program to discuss the media announcement of WWE Tough Enough 5.0 to the airwaves in April, the rumored signing of Amazing Kong, Monday Night Raw & Friday Night Smackdown as the Royal Rumble PPV card begins to take shape and alliances shifted in Nexus.

After a time out the crew broke down this Sunday’s TNA Genesis PPV and told fans where the promotion can be seen this Thursday and Friday in CT and NY and reminisced on TNA ReAction.

Phil’s latest interview with former WWE superstar Matt Hardy can be read on his blog Under the Ring at http://blogs.poughkeepsiejournal.com/underthering/

In between panic attacks on his teams near collapse, Spug rejoined Mase to recap last Saturday’s UFC 125 PPV event. The duo announced their former podcast “From Tapouts to Knockouts” will be joining the Wild Talk Radio Network roster as a full time show in 2011.

Friday 6pm Running the Ropes with Mav and Nic