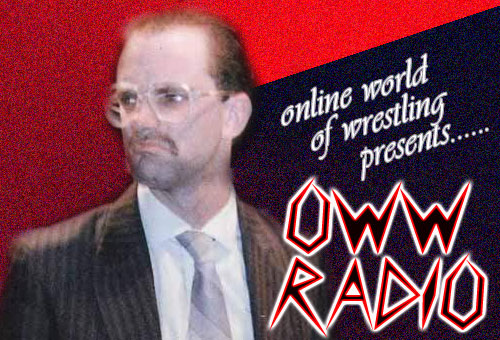 Online World of Wrestling is proud to present OWW Radio hosted by Nick Anthony, joined weekly by Dave “Kaveman” Kave and Cory “The Shooter” Morrow. Nick welcomes everyone back after taking the previous week off due to change of broadcast venues. Nick plugged this years Cauliflower Alley Club Reunion held in Las Vegas, Nevada at the Gold Coast Hotel Casino from April 13 to 15. Names already expected to attend this years CAC reunion are Ken Patera, JJ Dillon, Superstar Billy Graham and the Million Dollar Man Ted Dibiase who will be teaching a seminar among others. Nick will also be attending this years CAC gathering.

Nick moved onto the TNA Genesis pay-per-view discussing the match between Sting and Kurt Angle vs. Mick Foley and Jeff Jarrett. Nick expressed disappointment at the direction Samoa Joe’s character had taken going from a talented, tough wrestler to a knife waving vigilante. Nick praised AJ Styles calling him the highlight of the event.

Hogan Watch
(Hosted by OWW Radio Reporter Janae Blunt)
Janae Blunt reports that Hulk Hogan has plans to release a second autobiography titled “My Life Outside the Ring” due to be released on October 27, 2009.

Harvey Wippleman Interview Notes:
– Harvey talked about breaking into wrestling at the age of 14
– Harvey works regularly as a referee for Ken Wayne’s New Experience Wrestling
– Several of Harvey’s career highlights included going to the WWF, being in the main event at WrestleMania VIII when he managed Sid Justice against Hulk Hogan, winning the WWF Women’s Title briefly and being named 2008 Referee of the Year in Mid-South by rasslinriot.com
– When asked who he enjoyed managing the most, Harvey said he enjoyed managing all of his WWF clients. Harvey mentioned that he and Sid grew up together and considers him as family. Harvey also acknowledged his pre-WWF clients Phil Hickerson, Robert Fuller and Jimmy Golden
– Harvey talked about taking care of the Giant Gonzales outside the ring due to being severely diabetic. Part of Harvey’s job was to tend to Gonzales’ needs which meant being woken up at 4am to buy food for the Giant to eat
– Harvey never got along with Bertha Faye
– Harvey is enjoying his current role as a WWE Road Agent
– Harvey believes that Dolph Ziggler is going to be the next huge break out star in WWE
– Harvey spoke fondly of Andrew “Test” Martin
– Harvey called Howard Finkel one of his closest friends in wrestling and considers him as the greatest ring announcer
– Harvey promoted his book “Wrestling With the Truth” where you can purchase at http://www.crowbarpress.com

OWW Radio wish to thank the Producers who make these shows possible every week OWW Radio would also like to extend a huge thanks to our featured guest Harvey Wippleman.