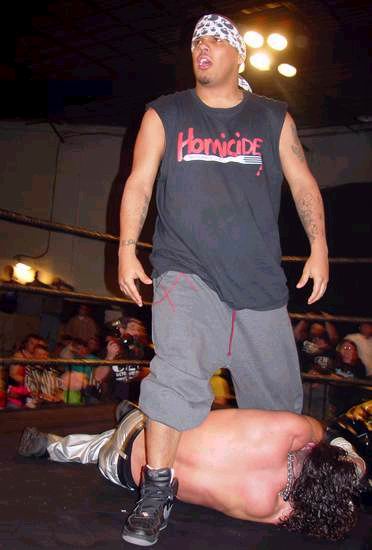 If you missed the Tuesday July 5th edition of the Online World of Wrestling Radio with host Alan Wojcik plus weekly contributors Kevin Scott & Spug, here are the highlights:

Our 100% free to the listener’s interview was with the one and only “Notorious 187” Homicide who spoke on several topics including: his ROH iPPV match with Rhino and the injury that occurred in the ring, being the 1st person to appear on two different PPV events on the same day, his feelings on the NY Yankees 2011 season so far, his visits to new Yankee Stadium & Fenway Park, his thoughts on being labeled a hardcore brawler, recalling his feuds with Colt Cabana & Steve Corino, being friends with Steve’s son Colby, his own view on CM Punk’s current WWE storyline, the new Mexican America gimmick in Impact Wrestling, the internet backlash towards the Urban Wrestling Federation’s debut, how he would end the NBA lockout & much more. Log onto www.ROHwrestling.com or www.urbanwrestlingfederation.com for information on both promotions.

After the break Kevin Scott, Spug & Alan addressed the pre-taped Monday Night Raw that saw CM Punk “reinstated” to face John Cena at the Money in the Bank PPV, Punk’s homophobic slurs on the Australian tour that Punk apologized for, John Cena’s Australian promo on the Rock’s absence on the tour, the new matches announced for the PPV, who should win the Raw MITB match and cash in the same evening and Punk’s name check of Dwayne Johnson.

The program wrapped up with a recap of TNA Impact Wrestling including matches for Sunday’s Destination X matches, the news of an indy wrestler using the name Krimson claiming gimmick infringement with TNA star Crimson plus his look that Sting is using as well plus the shocking news on Ric Flair from the Coney Island house show.  Spug shared a story of someone stealing his old nickname by a certain former TNA superstar.

Alan reminded fans that wrestling legend Kevin Sullivan and the producer/director of Card Subject to Change will be joining us next week as well as a return of BG James and some new faces in the coming weeks!!

Online World of Wrestling Radio would also like to take a moment to welcome some new friends to our program. First being http://www.wrwrestling.net where you can chat live with other fans during WWE & TNA programs plus more. This affiliation comes courtesy of Danial Adibi and the other forum members. Our other new friend is Ultimate Sports Talk that will feature all Wild Talk Radio Network programming in a live streaming format. Check them out by logging onto www.ultimatesportstalk.com