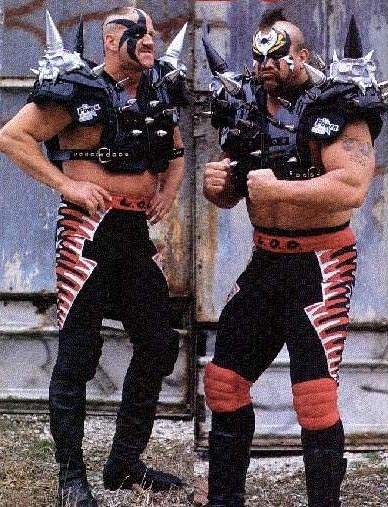 If you missed the Tuesday March 8th edition of the Online World of Wrestling Radio with host Alan Wojcik and contributors from Wrestle Talk Radio/Otaku Talk Radio’s Spug & Mase plus Kevin K. Scott formerly of Under the Ring, here are the highlights:

Our 100% free to listeners “WrestleMania Memories” guest was soon to be WWE Hall of Famer member Road Warrior Animal who fielded questions from our contributors, callers, chat room residents and emailers on a variety of topics including: his partner Hawk, WWE, NWA/WCW, Japan, AAW, Verne Gagne, Jim Herd, Vince McMahon, Hulk Hogan, Ultimate Warrior, WarGames, the Night of the SkyWalkers, plus his son James’s amazing career at the Ohio State University. Animal will be signing copies of his new book Road Warriors: Danger, Death & the Rush of Wrestling at bookstores across America. Log onto www.theroadwarrioranimal.com for dates and locations.

The program moved to a review of last Thursday’s TNA iMPACT that saw the crowning of a new World Heayvweight champion in Sting, the short term usage of former Jersey Shore cast member Angelina Pivarnivck, NY Jets star Bart Scott and the wedding of the Jarett’s with an axe weidling Kurt Angle. We apologize but this segment contains profanity as all of the contributors minus Alan could not hold back their frustrations with TNA Wrestling. This episode caused Kevin to walk away from his weekly contribution to the Under the Ring blog. Kevin is always welcome on the show even if Spug thinks his real name is Jamal.

Alan announced on the next show will the “King of Old School” and new OWW Radio Baseball Insider Steve Corino will stop by to help preview the 2011 Major League Baseball season.

March 26th 2001 was the end of an era, the closing of the once great World Championship Wrestling. The promotion was purchased by the rival WWE. On our March 22nd show we will celebrate the legacy of WCW with two former members of their roster, former Monday Nitro announcer Scott Hudson & former WCW superstar Marcus “Buff” Bagwell!

March 29th will be our WrestleMania 27 preview show with your favorite media contributors and your calls.

WTR and OWW remind you if you missed any of the previous WrestleMania Memories interviews with Jerry “the King” Lawler, Brutus “the Barber” Beefcake, George “the Animal” Steele, “the Genius” Lanny Poffo or Serena Deeb; you can download them now by following our archive links below to ClickWrestle On Demand or the iTunes Store. Did we mention IT’S FREE!!!

This week’s soundtrack featured Rock N Roll Hall of Fame member Billy Joel. Plus intrubite to Mike Starr we played Down in a Hole by Alice in Chains.

Online World of Wrestling Radio is hosted by Alan Wojcik (http://alanwojcik.tripod.com/ for credentials) with contributors from across the wrestling world and the most important people, listeners like you joining in the chat room and on the air!! No opinions are too outlandish (just no profanity please.) The show airs Tuesday nights 9pm until we run out of stuff to talk about on the Wild Talk Radio network. The links to listen live can be found at www.owwradio.com and www.wildtalkradio.com .

Wild Talk Radio is the home to the following outstanding programs, all times are Eastern:
Sunday 7pm Life Is Callous with Johnny Kashmere
Sunday 10pm (11 on a PPV night) Wrestle Talk Radio with Tim Stein, Mase, Spug, Will and Omega.
Wednesday 9pm Otaku Talk (Geek speak) with Spug, Mase and Omega
Thursday 11ish Anything Goes with Syndy Synn (www.syndysynn.com) and Sir Rockin
Saturday 12amish CB Radio with Sir Rockin, Subway & “the Godfather of Extreme” Rob Parks
OTL’s Mase is featured on a podcast called “Bashing the Books” that you can check out. From Tapouts to Knockouts with Spug & Mase will take to the airwaves on nights the UFC and Strike Force hold events.