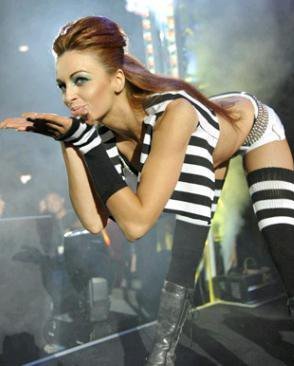 If you missed the Tuesday July 26th edition of the Online World of Wrestling Radio with host Alan Wojcik plus weekly contributors Mase & Spug, here are the highlights:

Our 100% free to the listener’s interview was with former WWE Diva and singer Maria Kanellis who spoke about her “ditz” character in WWE, her work with Make-A-Wish Foundation, her time on Celebrity Apprentice, learning to use sword fighting for a movie project, a new comic book project, the new After Buzz project, the B-Movie Mayhem project found on www.maria-kanellis.org, her love for the Chicago Bears & Cubs and much more. Follow her on Twitter @MariaLKanellis Maria had so much fun she will try and return on the August 16th edition of OWW Radio.

Alan & Mase recapped TNA Impact Wrestling as TNA heads to Hardcore Justice, the injury that has Matt Morgan on the shelf 6-8 weeks, the new X division signings and more. Check www.impactwrestling.com for news on this Thursday’s Spike TV program.

OWW Radio contributor and Miami Herald contributor Scott Fishman stopped by to talk about his interview with Rob Van Dam that lit a fire under the Young Bucks tag team (http://www.miamiherald.com/2011/07/21/2323861/tnas-rob-van-dam-continues-to.html#ixzz1T39bAgM4 for the great read.) He stayed around to talk about “CM Punk’s Excellent Adventure” that went to Comic-Con, AAW in Berwyn, IL and back to Monday Night Raw. This was followed by an open discussion of Raw that included Rey Misterio winning losing the WWE championship, HHH’s first shot being an on-screen executive character and much more. Follow Scott on Twitter @smFishman  Spug gave some information on the next IWA Lorain event, log onto Facebook to find out more.

Alan reminded fans that we’re scheduled to talk with several stars from the upcoming Tribute to the Fairgrounds 3 event including Hammerjack & promoter Marcus Pastorius on August 2nd, Rikishi on August 9th, plus Jerry Lynn & Maria Kanellis both come back on the 16th!! Log onto http://www.crossfirellc.vze.com/ for information on the event.

Online World of Wrestling Radio would also like to take a moment to welcome our new friends to our program. First being http://www.wrwrestling.net where you can chat live with other fans during WWE & TNA programs plus more. This affiliation comes courtesy of Danial Adibi and the other forum members. Our other new friend is Ultimate Sports Talk that will feature all Wild Talk Radio Network programming in a live streaming format. Check them out by logging onto www.ultimatesportstalk.com
You can get this and other past shows, by logging onto www.clickwrestle.com/podcasts/owwradio. ClickWrestle Video On Demand is also home to thousands of matches from around the globe. The show can also be found on iTunes http://itunes.apple.com/us/podcast/oww-radio/id334739148?ign-mpt=uo%3D4. Best part it’s FREE!!