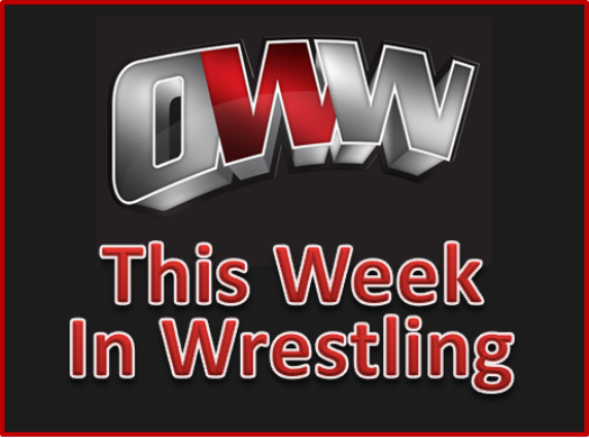 Ring announcer, Mike Rose, introduces the first match as “Mexican Hardcore Champ” Pedro Duro vs “The Chick Magnet” Mozart Fontaine.  Fontaine gets the pin over Duro and then gets “Pearl Harbored” by “Mr Upgrade” Mike Reed and his manager, Clarke Kelly.  Kelly proclaims that Reed can body slam anyone at any time and his title match with King Mega will soon prove it.  Duro then takes advantage of the downed Fontaine and steals his bowtie!

Next on the card was Manager Sebastian Night’s “Mercenaries” Nick Sohlo, “Outlaw” Stockade and Zac “The Ripper” Conner facing newly formed team of Franics Kipland Stevens and Alvin Alvarez.  The resident Nerd and smallest competitor, Stevens, took the grunt of the punishment for most of the match as partner, Alvarez lead the energetic crowd in a “Lets Go Kip” chant.  While outnumbered and out-sized by the Mercenaries, Alvarez managed to get in last minute, hard hitting offense to beat down the larger man Stockade long enough for Stevens to outsmart him.  A foiled DDT by Stockade turned into a favorable pin for the team of Stevens and Alvarez.

Billy Bax was then seen on the mega tron cutting in line in front of the children to see Santa Claus.  He received a special box from Santa even though he was naughty.  Santa presented Bax with his former wrestling gear (cap & gown) and encouraged him to once again become the successful “Valedictorian” from his wrestling past.

The special 3-way match-up turned into a 1-on-1 match between Anthony Bowens and “The Fighting Paramedic” Corey Blaze with injured “Tribal Warrior” Fallah turned special guest referee. Senior Referee Larry Peace coached Fallah with refereeing basics and got the match going.  Fallah continued to buffoon around chasing the action as Bowens and Blaze knocked out move after move. After a banana break and a brief nap in the ring, Fallah finally counted 1-2-3 as Blaze pinned Bowens.  Then what? Another “Pear Harbor” job from Reed to Fallah!  I’m sensing a theme here!  And WOW that was a huge body slam from Reed, his chances at taking the title from King Mega are looking more realistic now!

Next up was backstage reporter Max Mikado and his special guest, legendary wrestling icon, “The Cheetah Master” for “On the Mic With Max”.  Cheetah Master was championing a local charity food drive and expressed the importance of helping out those in need at this time of year, especially our neighbors.  The crowd erupted in cheers at the sight of Cheetah Master and continued screaming for the entire 4 minute entrance!  The excitement was interrupted as Billy Bax appeared on stage in his cap & gown and had bitter words (and a rubber chicken) for Cheetah.  Tension was rising when Courageous Cruz ran out and jumped started his match with Billy Bax, leaving Cheetah to walk off on his own accord.

Billy Bax battled Courageous Cruz in a high-flyer, hard-hitting match that was evenly matched throughout.  Bax, with a sleak moonsault from the top rope misses Cruz as he rolls at the last minute.  Cruz then attempts to land a beautifully executed 450 splash and just hits canvas as he rolls through to the other side.  Bax then catches him on the rebound and hits a ferocious snapmare driver to get the pin.

The Heavyweight Championship was a Body Slam challenge between “Mr Upgrade” Mike Reed and Champion, King Mega.  The first to body slam the other wins the title.  After the distracted ref missed 2 slams by Mega, manager Clarke Kelly & Reed went on the defensive to make sure it didn’t happen again.  The drama filled match ended with Kelly getting into the ring to help Reed in an attempted slam and ending up flat on his face!  Mega was then able to take advantage of the situation and got the slam on Reed to win the match.  Santa and his elves along with mascot, Coastee came ringside to celebrate with King Mega and hand out treats to the fans.

After intermission, the show started back with a “Battle of the Biceps” between “The Prince of Aesthetics” Damian Gibbs and “Heavyweight” Sean Royal.  We started off with a pose down between the two followed by a push-up contest.  The crowd certainly favored Royal over Gibbs the entire time and were angry when Gibbs took the early lead in the match.  Royal was eventually able to outsmart, perhaps out muscle, Gibbs when he got the roll-up while Gibbs was showing off.

Next up we see on the mega tron that Santa is attacking King Mega backstage!  What happened?  No, not Santa!  Another “Pearl Harbor” job?  YES, Santa is actually Bazooka Joe who is exacting his revenge on King Mega and starting trouble again.  Bazooka Joe was suspended back in September for the remainder of 2013 and feels he never got his fair chance at the title.  Instead of an extended suspension for his bad Santa act, Mega insisted that he face Joe in January for a title match so they can settle this feud once and for all!

Next on the card is a tag match between “Self-Made” Michael Blake with His Guy and partner Harry M. Baldwin going against the newly formed team of RCP Developmental students Joey Silver and Colton Quest.  Silver and Quest worked beautifully together as a team with coordinated moves and in-synch timing.  Once Baldwin got angry (and lost his hair) the match turned and Silver ended up on the wrong side of the ring for way too long!  Blake and Baldwin worked over Silver and just mocked his partner, Quest, and the fans.  Baldwin, being a little too arrogant allowed Silver to get away and tag in the fresh man, partner Quest.  While Silver had Blake occupied on the outside of the ring, Quest was able to beat Baldwin enough to allow him a top rope frog splash for the victory.  Quest gets the pin over Baldwin to win the match for the team of Silver-Quest.

Tensions have been brewing between Ryan Rush and Chris Steeler for months.  They have had multiple face off’s, yet neither has come away satisfied.  This was the match that had to happen – Last Man Standing!  It was a drama filled back and forth exchange of athleticism and willpower.  Neither man would give up!  Steeler fell through a ladder perched between the ring and guardrails, Rush took multiple chair shots to the head and body, both were thrown out of the ring and into the ring stairs, against the guardrails, into the ring poles, it was just intense!  After 17 minutes of brutality, Steeler got the best of Rush by landing a neck breaker on top of a pile of about 15 chairs!  Rush could not stand on his own, Steeler made it to his feet (just barely) and was declared “Last Man Standing”.

“Best in the Midwest” Sadist  -vs- TBA

Matches Signed for Winner Takes All…

And MUCH MUCH More

For the Devil Mountain Wrestling Championship,

Che Cabrera and a mystery partner Vs. Maynard Skynard and Jesus Kruze

“Lance is returning for the first time since his injury at the Honor Cup suffered at the hands of Kao Storm & Cory Kastle. Lance has vowed to extract revenge on Kastle and to win his first Championship in DCW, the Undisputed Championship!”

“Skull was originally scheduled to compete in the 2013 Honor Cup but was unable to due to a death in his family. Seven months later, Skull finally gets his chance to wrestle in front of the DCW & PPW fans; this time with that chance being for the PPW Championship!”

~1ST EVER HARRO ATHLETICS BATTLE FOR THE BAND!~

(C) “THE MAPLELEAF MACHINE” KAO STORM (vs) SHAWN SCOTT (vs)

MORE MATCHES TO BE ANNOUNCED!

“Rocksteady” ALEX VEGA vs 3 MYSTERY OPPONENTS in a gauntlet match

A Block – “All Ego” ETHAN PAGE vs SEBASTIAN SUAVE