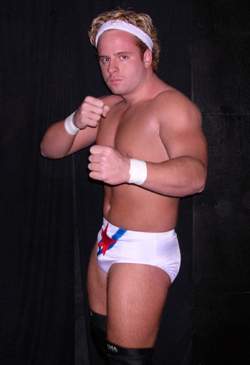 NYWC is proud to announce that Pat Buck is the new head trainer. Pat Buck began his training here at NYWC in 2001.  He ventured out to compete in the independent scene up and down the East Coast primarily in New England until 2005. In 2005, he relocated to train and work for Ohio Valley Wrestling (OVW). At OVW, Pat trained simultaneously under Rip Rogers and alongside contracted talent Al Snow.  For the next four years, Pat worked OVW’s live events and weekly television shows sharpening his skills as a professional wrestler.  In 2009, Pat relocated once more to train under Steve Keirn and Norman Smiley at Florida Championship wrestling (FCW).  He explored another area of the industry officiating FCW events. During this time he helped train those who enrolled in FCW’s beginner program.

The following people had this to say about head trainer Pat Buck.  So don’t just take our word for it….take theirs!

Steve Keirn – FCW Owner/President/WWE Head of Developmental
“Pat worked here with us at FCW for over a year and did a great job. He was always on time and went above and beyond in everything he did with us. His work was solid and believable. I will speak for us here at FCW it was a pleasure to have him with us.”

Norman Smiley – WWE/FCW Trainer
“During my time working with Pat Buck I have found him to be extremely professional, knowledgeable and patient as he has assisted me in teaching some pro wrestling beginner classes. Being around Pat I can say that he has a passion and is also educated to the history of this business. I would feel very comfortable in recommending him to any reputable wrestling school to teach at any level as Pat does have a solid foundation to the basics of wrestling in a safe manner.”

Mikey Whipwreck – Former WCW/ ECW Superstar, Former NYWC Head Trainer, and current NYWC Booker
“There are very few people I would feel comfortable running a school I oversee and Pat is one of those people. We are very fortunate to have him on board as our head trainer.”

Mike Bucci – (Simon Dean/Super Nova) Former WWE Superstar/Head of Developmental Talent
“Pat Buck is the best guy I have ever seen who didn’t have a major contract…he is someone I would go to, to see if something I was doing made sense in a match…Pat’s dedication is second to none and I would think he would expect nothing less from the people he trains.”

Al Snow – Former WWE Superstar/ Head Developmental Trainer / Tough Enough Guru
“Pat is a very passionate performer. Who is highly self motivated and driven to succeed in the wrestling business.  Pat will provide anyone he trains a solid foundation of skills. Which will assist them in achieving their goals in professional wrestling.”

Santino Marella – WWE Superstar, Former Intercontinental Champion
“Pat Buck  is a seasoned professional wrestler that for many years has been a true student of the game, Buck has had some of the finest wrestling teachers that the world has to offer, Learning many different philosophies and psychologies from so many great coaches, Buck has the skill set and knowledge base to now teach a variety of student types at various skill levels, his love for the industry combined with his great work ethic, will no doubt allow Pat Buck to be one of the best new instructors wrestling has to offer.”

Curt Hawkins  – WWE Superstar, Former WWE Tag Team Champion
“I’ve known Pat Buck since the very first day that I began training with the NYWC. I have always been impressed with his level of professionalism & unbelievable passion for the professional wrestling business. Pat continues to improve each & everyday. He has become one of the most well rounded wrestlers in the country by experiencing different wrestling all over the US & gaining knowledge wherever he goes. Pat Buck is a true student of the game.”

Cody Rhodes – WWE Superstar, Former WWE Tag Team Champion
“My very first match was with Pat and he led me through it like a champ.  He’s always worked hard and dedicated his life to wrestling.”

Zack Ryder – WWE Superstar, Former WWE Tag Team Champion
“Pat has learned from some of the greatest teachers that professional wrestling has to offer. He is ready, willing, and able to share his knowledge and passion.”