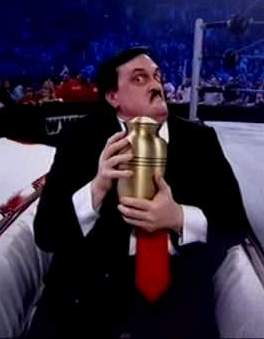 Jack and OneInchBiceps are joined by Paul Bearer aka Percy Pringle III for his third interview on Inyourhead, however in reality his fifth interview as he appeared at the Heady’s once before and interacted with them at the NWA Legends Fan-Fest. Paul Bearer said it was good to be back and asked Jack ,am I on again because you love me here on Inyourhead and Jack representing the whole of the Heady-verse said yes we all love you. Jack goes on to say his grandma like every Wednesday asked who he was having tonight and he goes Paul Bearer, her reply was I’m happy he is alive after being thrown of the ladder by Kane. Paul Bearer goes if he has survived being buried in cement he can survive anything, both him and The Undertaker have gone through everything and have some tough genes in their body.

Jack’s first question was: What was it like to be back on Smackdown, especially due to the loud ovation? Paul goes it was awesome as he never had plans to return again, he was doing Indys, especially for NWA Hollywood and other legends signings, but at that moment he put his WWE career on the shelf. Paul goes after losing his wife two years ago, it was hard for him as he was with her for thirty years and it knocked the wind out of him whether to work full-time again. He goes a few friends phoned him to do Indy signings and he goes I always will be a wrestling fan and he enjoyed doing it, as to his WWE return this year he got a phone call in June 2010 out of the blue from the creative, they had a idea and wanted to know if Paul Bearer was interesting in returning without no hesitation he goes no. He said the reasons were because of the travelling and both parties had different ideas for what they wanted. He goes not many people say no to the WWE and yet they continued to phone him, even the Undertaker did personally to persuade him to come. Eventually they made a deal where Paul would do just Television and Pay-Per-Views. Paul goes his re-debut was one of the greatest things in his career. The pop of the crowd was amazing and enjoyed it very much, his last stint in the WWE was something very important to him and his run was only supposed to be six months. He goes they had to do the buried alive angle with The Undertaker because he had some health issues but then went on to say that his last month after being kidnapped by Edge was some of his greatest moments in his career and had a lot of fun doing it. Paul said he replies to his fans through email and twitter, lot people asked him he was treated unfairly, he goes no he had such a good time and the WWE were so professional and nice to him, he couldn’t praise them enough. Although he said when Edge threw the ball at his head that hurt alot,or as he said “like a son of a b***h”. The WWE even gave him a great bonus for the segments with Edge. Paul goes for the last 6 months he just had to do television and PPV’s,he goes going to places such as England, Canada and New York was great, he had such a good time and again thanked WWE for all their hospitality and help.

Jacks next question was: Was it hard to be a heel as the Paul Bearer character is loved by the fans? Paul goes naturally he is a heel and if this was his last run, he wanted to have the best time he had. With he goes he enjoyed being back with Kane, Undertaker, Vince and the McMahon family, old friends and loved interacting with the younger talent and got to know them better especially the Nexus members. Paul goes a lot has changed in the business in forty years since he debuted and referred WWE to being Hollywood instead of “Sports Entertainment”. The writers are making movies and episodes of “cheers”.

Jack asked if Paul’s promo’s were scripted? Paul goes no, they have never been scripted since he started working in the WWE,Paul said two weeks ago he celebrated his 20th year with WWE. In the twenty years he had no dirt on WWE and continually praised them. He said he has a lot of friends, brothers and sisters working for the company and would never speak badly about them. Paul goes he had great times in WWE and will be attending Wrestlemania.

Jack then asked this year Undertaker could be 19-0 in the Wrestlemania streak, when did the WWE and Undertaker realise he had this great streak? Paul goes for himself by Wrestlemania 13 he realised, he has a big winning record and has yet to lose a match at Wrestlemania. Paul goes his first Wrestlemania was with Undertaker’s first Wrestlemania when he wrestled Jimmy”The Superfly” Snuka, he felt so blessed he could work alongside a dear friend in Undertaker and amongst others, after being part of this profession. He goes he was brought up in a middle class family and was just a little kid in Mobile Alabama, as a kid he used to take pictures in the front-row, set up rings and hold the wrestlers suitcases along with his good friend Jim Cornette.

Jack decided to take in a few callers and the first caller was Crystal from Denver: Her question was what are the roles for being a really good manager in the wrestling business? Paul replies by saying that his rule was that he has managed 45+ wrestlers and his main rule was that the manager needs to remember that the fans are buying the tickets to see the wrestler, the manager is not the star, but as a manager you should never overshadow the star. Jack asked did any wrestlers feel like you were trying to take the spotlight? Paul goes yes he did because they wouldn’t work for shit, because they liked him more than the star. Paul said this happened a lot in World Class Championship Wrestling with the Von Erichs, stars like George Wales who played Master G against Jake the Snake at Wrestlemania. Because of his in ring ability was limited and people were watching himself instead of the star, Paul goes even Vadar had problems wanted to see Percy instead of him, he even got vocal backstage. Paul goes it was good to see The Rock last week on Raw and praised his appearance and wished him well.

The next caller was the Golden Diamond: His question was regarding his work with NWA Hollywood Paul goes before he went to the WWE in June, he was doing some work with them beforehand. Paul goes March 6th 2011 he will back in NWA Hollywood. He praised Dave Marquez and the rest of the crew. Another question by Golden Diamond was referring to the story about Paul, Michael Hayes, Terry Gordy and Buddy Roberts when Jimmy Gardeas house got caught on fire in Tampa. He goes they all shared a house and when he came outside he saw Terry Gordy with a can of beer near the swimming pool, holding a hose putting the fire down on a chair, Paul screamed “what are you doing?” Terry goes “Paul the house is on fire”, Paul goes one of his greatest moments ever and you had to be there to see it. Paul goes he misses Terry and always brings up that story. Golden Diamond goes one of his favourite tag team was with Dr Death Steve Williams as the Miracle Violence Connection in All Japan Wrestling. Paul then told us a story about when he Undertaker went to Japan, a place called Rebrangi in Tokyo, where most US wrestlers hang out, he goes him and Undertaker were walking down the road and they bumped into Dr Death Steve Williams and Terry Gordy. They both took Undertaker and Paul Bearer to a night out and let’s just say Paul cannot remember that night.

OneInchBiceps asked a question from the message board: Nikhil asked if Paul has been seen Abyss from TNA and is he similar to Kane? Paul praised Abyss for being such a great talent and said he met up with the TNA stars and old friends at a houseshow a few weeks ago. Paul goes he had a chance to manage Abyss within the first year of TNA’s existence as he was there when they were looking for one. He goes Abyss is a great talent and reminded him of Terry Gordy. Paul goes he as a lot of old friends in TNA but said he thinks the world out of Jay Lethal, he thinks he is a wonderful person and great talent, he goes his work with Ric Flair earlier this year was brilliant and made him laugh. Paul praised the Jarrett family and stays in close contact with them. He said Jay is a very underrated talent.

Jack next question was: Did Paul Bearer remember managing the Big Show in the early days? Paul goes of course and even had a wrestling/skit match with him one time. Paul praised him and goes Big Shows latest film Knucklehead was hilarious and has improved a lot during the years. Jack then asked: How were Paul Bearer’s sons doing in the wrestling business? Paul goes he has two sons. Aged 31 and 24. Paul goes his youngest son who wrestles Indies in the Gulf Of Mexico, he took him backstage at TNA,Paul goes Mick Foley used to babysit Paul’s youngest son and when Mick Foley heard his youngest son Daniel was with him a few weeks back he went straight up to see him. Paul goes Jeff Jarrett and Mick Foley both praised him and Paul goes he does not push his sons, and maybe one day he will pick up the phone and get him into development or TNA. Once he proves himself. Jack asked: Do you think Kane could go back to his old gimmick? Paul goes why they would want him to go back and put the mask back on. Paul said Kane is first class and a exceptional person. Paul said he would never speak bad about anyone. However Paul did say he had heat with one person and that was Sunny better known as Tammy Sytch for a long time. However at the NWA Legends Fan-Fest in Charlotte they bumped into one another and he apologised to her, they hugged and made up.

Jack asked what were Paul’s thoughts on the 2.21.11 vignettes and the stare down between Undertaker/Triple H? Paul goes it was brilliant and executed very well. He had no idea of what the story would be and praised for the silence and both stars looking at the Wrestlemania sign. Paul said he will be at the Wrestlemania Access Signing in Georgia.

OneInchBiceps had one more question from the message board: Dan asked If he was to manage a new wrestler today, who would it be? Paul goes he does not know. However he is excited about the new series of Tough Enough with Stone Cold Steve Austin as a coach. Paul is blessed to have his career as there are not many old-school legends left nowadays.

Paul praised Inyourhead to be very professional and hopes he is back soon. Paul Bearer thanked Inyourhead for allowing him to be on tonight and Jack did the same.
Interview Time. 43minutes and 55 seconds

-March 2nd 2011: InYourHead welcome both Zach Gowan and Shad Gaspard (aka one half of Cryme Tyme).

-Bob Colling’s http://wrestlingrecaps.wordpress.com/
(Over 840 shows have been recapped including WWE, WCW, ECW, TNA, ROH and other independent companies!)

Related Items
← Previous Story Bruce Hart talks the release of his book
Next Story → Luke and Butch: Before the Bushwhackers