Home / Miscellaneous / Bruce Hart talks the release of his book

Bruce Hart talks the release of his book 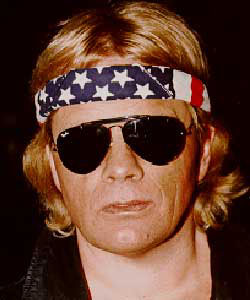 Bruce Hart Discusses The Reasons For Releasing His New Book (“Straight From The Hart”), Being Frustrated At Seeing Harry Smith “Not Get The Opportunity,” Why He Believes A Posthumous Induction Of His Brother Owen Into The WWE Hall Of Fame Should Not Be Seen As Disrespectful Or Exploitative, The Chances Of “The British Bulldog” Davey Boy Smith & Brian Pillman Being Inducted Into The WWE HOF, The Hart Family Reunion At WrestleMania XXVI, The Idea He Pitched To The WWE For The Bret Hart/Vince McMahon Storyline (And Why He Feels It Did Not Come To Fruition), Stampede Wrestling Memories, & The Legacy His Father Stu Left Behind

Bruce Hart was the featured guest on this week’s live edition of the award-winning Monday Night Mayhem. You can feel The Mayhem every Monday evening (at 7PM ET/6PM CT), exclusively on The Monday Night Mayhem Radio Network (www.MondayNightMayhem.com).

Bruce joined The Big Mosh & Scott Hudson for his exclusive interview with The Monday Night Mayhem Radio Network (to promote the release of his new autobiography “Straight From The Hart”), which is now available in Windows Streaming Media or via the official MNM Podcast on iTunes:

The reasons for releasing his new book (“Straight From The Hart”) at this point in time: “It was a combination of things. One of the motivations was that had been so many books from the Harts. I felt most of them, not to knock them, didn’t really do justice. They were either propagating agendas, and in some cases, not really expounding on the things that were of interest. There were a lot of hot button issues for the Hart family, such unfortunate & sad like my brother Owen, or Chris Benoit & Davey Boy, and some controversial things like that Montreal fiasco with Bret & Shawn. I’ve sort of been in the eye of the hurricane and not-so perfect storm called the wrestling business for so long that I sort of felt somewhat qualified to render a pretty insightful, legitimate firsthand perspective on it.”

The chances of his brother Owen, along with “The British Bulldog” Davey Boy Smith & Brian Pillman, getting inducted into the WWE Hall of Fame & why he believes a posthumous induction of his brother should not be seen as disrespectful or exploitative: “I would say all three of them frankly, but I would say if you were putting it in some order, I say the guy they should have already inducted (and I would even advocate them doing it this year, but it’s too late) is Owen. Not only a phenomenal wrestler & a legend, but given what happened, I think it would be only fitting. I suppose they’re probably apprehensive about it, due to some acrimony between Owen’s widow & them. If you’re honoring him, I can’t how she could raise hell or claiming in any way shape or form it’s disrespectful or exploitative.”

His thoughts on the split of The Hart Dynasty on WWE television, why he is upset at David Hart Smith not being featured prominently right now in the company, & which current RAW superstar he feels Harry should transition into a program with: “I’m actually pissed off with that, especially with Harry (David Hart) Smith. He’s an awesome worker, he’s not like some second generation who’s just there because he got in there by his family name. I rate him high, and the only second-generation wrestler I rate higher is Randy Orton. I’ve thrown out some stuff off the top of my head for Orton & Harry going back from when Dynamite broke his back (with Bob Orton & Don Muraco). You already have a little hook there where you could of had Harry & Randy. They would have had a great match, because their styles compliment each other. They could have even capitalized when they had that lame thing where Bret was General Manager of RAW, and he should have been attached to them. It frustrates me to see Harry not get the opportunity.”

Much is contained in Bruce Hart’s exclusive interview with The Monday Night Mayhem Radio Network, including his candid thoughts & comments on the Hart family reunion at WrestleMania last year, the idea he pitched to the WWE for the Bret Hart/Vince McMahon storyline (and why he feels it did not come to fruition), Stampede Wrestling memories, plus the legacy his father Stu left behind. For more information on the release of “Straight From The Hart,” log on to www.ECWPress.com, or follow ECW Press on Twitter (located at www.Twitter.com/ECWPress).