Paul Heyman talks about his role at SummerSlam 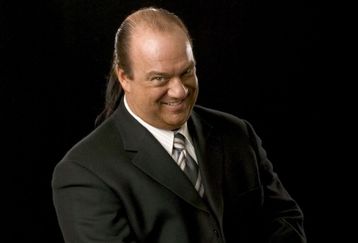 Ring Rust Radio had WWE legend PAUL HEYMAN on the show recently, and it was a great episode with plenty of exclusive content.

Donald Wood: SummerSlam is Sunday, August 17, on the WWE Network. Your client, Brock Lesnar, will be fighting John Cena for the WWE World Heavyweight Championship. After being behind one of the most shocking moments in wrestling history, what does the duo of Lesnar and Heyman have in store for SummerSlam?

Mike Chiari: Brock Lesnar vs. John Cena is the biggest money match WWE has to offer right now, but after SummerSlam what Superstar or Superstars would you like to see Brock face moving forward? Who do you think is ready to and worthy of going up against Brock?

Brandon Galvin: The running joke among us is that every new promo you cut is a top 10 promo of the year because your delivery and intensity is impeccable and you always incite an emotional reaction from the audience. Is there anybody you’ve studied during your career, whether they be in wrestling or outside wrestling, to help you evolve into the best promo man in the business?

Paul Heyman: Everyone. I watch everyone. I look to see what everyone does. I watched my father present his case to juries, my father was a personal injury attorney in the Bronx, I watched my father present cases to juries when I was a kid. I look now at the WWE Universe as if they are my jury and I am the advocate for my client. In terms of people that I watch, I watch everybody. There is something to learn from every single person who goes out there and performs because you’re going to be judged up against them. The way they hold their hands, the way they hold the microphone, the way they tilt their head, the way they engage the audience, the way someone cuts their eyes to the right and to the left, the way someone avoids the camera, the way someone looks into the camera, how do they hold their legs, what is their body language, what does anything they do tell you in their desire to convey their message to you. And I study everybody because I’m competing with them in terms of being the best person on the microphone.

Donald Wood: Tuesday marked the release of the new “Ladies and Gentlemen, My Name is Paul Heyman” DVD. As someone who has been around the business for a long time, how does it feel to have a DVD made about you and what’s it like knowing the WWE is behind the production?

Paul Heyman: If you asked me two years ago if the WWE would’ve made a DVD of me, I wouldn’t say yes. I wouldn’t have envisioned this coming and I wasn’t particularly happy when I heard they were going to do it because I didn’t know what stories they were going to tell. I also knew that meant sitting down and reflecting upon my career and my life and I hate looking back. I’m obsessed with looking forward. I’m flattered by all of the positive reviews the DVD has gotten and I’m glad people like the take that was offered. Really, I have nothing to bitch about regarding it.

Brandon Galvin: Was there anything cut from the DVD that you wish made it?

Paul Heyman: I have no idea what was shot for the DVD. My participation in this DVD, besides giving them pictures of my children and a few pictures of my parents to the WWE, was I sat down for an interview, we did it all in one shot, it took about 16 hours. The only request that I had was that we kinda do it like a Charlie Rose interview. I’m sitting at a table because it’s a more relaxed atmosphere. I didn’t want to shoot it in my house. I didn’t want to shoot it in my office. I sat down for 16 hours and we banged it out. I went in with the full intention of just whatever the question was, I’m going to give it a 100 percent honest answer. I don’t know what else was shot. I wasn’t privy to who was being interviewed for it, although I had heard. I don’t know what footage that was shot ever made it, I don’t know which stories were told never made it, which probably means if this documentary goes well there will be a Part II. After doing an interview for 16 hours, I don’t really know what they asked me that didn’t make the cut simply because it was a 16-hour interview and I was glad to be done with it.

Mike Chiari: You were there front and center when Brock Lesnar picked up the biggest win in WrestleMania history against The Undertaker. Knowing what type of condition he was in after that match and knowing everything he’s accomplished over the course of his career, in your opinion do you believe we’ll ever see The Undertaker wrestle another match?

Paul Heyman: I don’t know. I truly don’t know. I don’t know as a human being and I don’t know as a character. I don’t know what he’s thinking and I don’t know what his reaction to this is. I didn’t see The Undertaker after the match. The Undertaker legitimately collapsed five seconds after he walked through that curtain. He never even made it to the Gorilla position. He was in between the set and the curtain that leads to the control room, known as the Gorilla position. He collapsed there. They loaded him into the ambulance down a side ramp from right behind the curtain and was taken straight to the hospital. That’s not a storyline, that’s the way it happened. I don’t know how he feels about it. I don’t know if he feels that once his streak was over, that’s what he had left to give. And I don’t know if he feels that he doesn’t want to go out like that. It’s not something I’m privy to the answer of and nor should I be for that matter. It’s clearly his decision.

Donald Wood: I’d be remiss as a kid from Philadelphia who witnessed the ECW revolution if we didn’t touch on that. You helped build one of the most successful wrestling federations in the history of the sport. With TNA struggling and a wide-open market desperate for a viable alternative, do you ever think about getting back in the saddle as a primary shot caller for a company again?

Paul Heyman: No. No. No. In 2010, after Brock Lesnar choked out Shane Carwin, there was a discussion that I had with TNA that involved Spike TV. Ultimately, because TNA had been trying to get me on the phone from the day I left WWE in 2006 and I never took the phone call. We finally got into a conversation because Spike TV had reached out to make that happen. Ultimately, the story of this is, if I was going to do it, I wanted the Dana White deal. I wanted complete control, I wanted a piece of the company and I wanted the ability to, when the time was right, to take it public. I wanted to do the programming completely different than the way they had been doing it and Spike TV signed off on it. The concept was a very youth-oriented, youth-based, youth-marketed promotion. A complete contrast to the way WWE does things. A complete and utter alternative to WWE at the time. While the ruling family in TNA had no problem with my salary request, my ownership demands, my concepts, etc. etc., they didn’t want to implement as much of a youth-oriented product as I was looking for and I balked at it. I have no regrets about that. At the end of the day, they were happier being a WWE-lite promotion than they were branding themselves something different as TNA. So that was the last flirtation I had with doing my own thing. I do my own thing with my marketing brand and talent agency in New York City called Looking 4 Larry Agency. I’m very proud of the body of work. We have a long list of clients including 2KSports and in the past THQ and EA Sports and a number of different clients. And I get to do my own thing in the mainstream world with a marketing firm right in the heart of New York City. In regard to doing my own thing in sports entertainment, I kinda do my own thing now with Brock Lesnar and I’m very happy doing it. Running a whole show is a 24/7 and 365 commitment, and you would need an enormous amount of financing and very strong distribution set up front to get me to the table to even consider such a task. Otherwise, it’s doomed to fail.

Mike Chiari: During your time at the helm in ECW you became known for your ability and willingness to scour the globe and bring in unique talent. With WWE currently doing the same in the form of Kenta and Prince Devitt specifically how impressed are you with WWE’s efforts to broaden its horizons in a sense?

Paul Heyman: Very. I commend them on this reach out for the best talent on the face of the planet. That obviously includes the two men you just mentioned. We’re getting the cream of the crop and that notes a style change in the WWE. A higher work rate. Higher customer satisfaction in terms of the actual in-ring product. It’s a very exciting future to think about the kind of people who have yet to debut on WWE television.