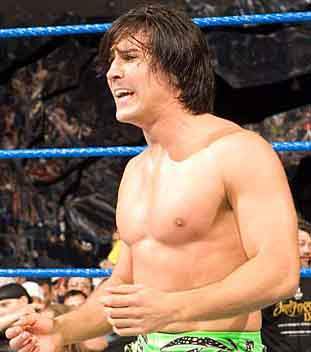 Paul London Discusses His Forthcoming Dragon Gate USA Debut (And How He Was Approached To Join The Roster), Wishing To Collaborate With Bob Saget As Part Of His A&E Reality Show, Why He Turned Down TNA’s Latest Contract Offer To Him, The Chances/Likelihood Of Seeing Him Return To The X-Division, & Some Strong Words For Matt Hardy

Former WWE/World Tag Team Champion & former WWE Cruiserweight Champion, Paul London, was one of the special guests on this week’s live edition (03/15/09) of Monday Night Mayhem (presented by ReelWrestling.com), hosted by The Big Mosh, Blade, & “The Chairman Of The Board” Todd Vincent. You can feel The Mayhem live & in streaming audio every Monday night (at 7PM ET/6PM CT), exclusively on The Monday Night Mayhem Radio Network (www.MondayNightMayhem.com).

London joined The Big Mosh & “The Chairman Of The Board” Todd Vincent for an exclusive interview (to preview next weekend’s Dragon Gate USA’s “Open The Ultimate Gate” & “Mercury Rising” events in Phoenix, AZ) & his return to “Your Home Of Wrestling Radio,” which is now available in Windows Streaming Media or via Monday Night Mayhem’s official Podcast on ITunes:

How he was approached to join Dragon Gate USA: “I’ve known Gabe (Sapolsky) for several years from Ring Of Honor, and he contacted me and said whenever I’m ready to wrestle for us & if you’re interested, let me know. I was definitely interested, and Dragon Gate is pretty high caliber, one of the higher calibers in my opinion. I’m excited for it and just tyring to add what I can.”

What his morale is like now being part of DGUSA after his time in the WWE & what the fans can expect from him now: “Say you create something, and imagine knowing that you can definitely offer way more than you are, and you’re willing to do that night in & night out yet, that’s not the confines of working. You’re working with something much smaller, much more censored, and I think as a result, much more exaggerated for the negative. That’s the environment you’re working in when you’re working with the entertainment industry & the WWE. You’re going to work and walking into an editing room. On one hand, it makes your work more creative, but it’s almost like having a studio chop up everything you do. That’s where a lot of the frustration comes in. I’m just a…I don’t even know if calling myself a prop would be very fair even. They either care about your ideas or they couldn’t care less. That’s what I dealt with.”

If he was approached to return to TNA  upon leaving World Wrestling Entertainment & how appealing is TNA/the X-Division to him currently (and if a return to TNA could be down the pipeline this year): I do keep up with the product some, because I have some friends there; obviously Brian (Kendrick) is working there now. It’s a interesting show. A lot of it is very similar, but with of it, it has digressed in some parts. It takes two to tango, and I don’t really feel that TNA has any interest in having me there or they would have made a stronger effort than they did. Instead, they made a pretty lousy & insulting effort almost a year ago to be honest with you. I don’t have much interest at this point, so I could go to another place & be unappreciated…No thanks.”

Paul’s thoughts on some WWE Superstars who may bad-mouthed him on his way out of the company, including a message to Matt Hardy: “He doesn’t count. I’m talking about people that matters like friends of mine. That doesn’t matter to me. I meant real comments from real people.”

More is contained in this exclusive interview with Paul London, including his candid & uncensored thoughts on whether or not he watches the current WWE product, along with the prospects of meeting (and potentially collaborating with) Bob Saget, who is rumored to be filming selected scenes of his A&E reality show using Dragon Gate USA as the backdrop. Experience some of the hottest wrestling action of the year next weekend in Phoenix as part of WrestleMania weekend by checking out “Open The Ultimate Gate” & “Mercury Rising,” as part of DGUSA’s desert double-shot. For ticket information & the complete card for both events, log onto http://www.DGUSA.tv.

“Your Home Of Wrestling Radio” is officially presented by ReelWrestling.com (http://www.ReelWrestling.com), where your favorite Superstars are just one click away! The award-winning Monday Night Mayhem (voted on by you, the fans as the “Show Of The Year” in the 2009 & 2010 Wrestling Radio Awards) is also sponsored by: Sizzlin’ Sauces (the official hot sauce of The Mayhem: http://www.SizzlinSauces.com), & TicketRelief.com (the official online traffic school of The Mayhem: http://www.TicketRelief.com), & B. Brown Video (where you can relive the moments & memories of professional wrestling’s rare & vintage moments: http://www.BBrownVideo.com)