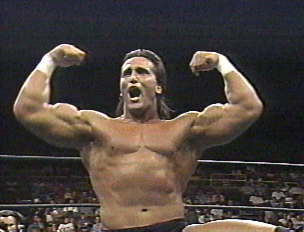 PAUL ROMA DISCUSSES THE RIB PLAYED ON RICK RUDE DURING A LIVE PPV, THE WRESTLER HE WOULD HAVE MARRIED IF HE WAS GAY, VINCE MCMAHON’S “SEXY B*TCH,” AND MORE By WorldWrestlingInsanity.com

He’s the man you hate to love…but you know you do.  No one is safe as the one and only  Paul Roma returns ClubWWI.com for an audio event unlike any other.  So Notorious, it’s …” GLORIOUS!”

He’s the Internet’s favorite Horsemen and the man who causes hardcore fans to toss and turn at night with anger.  But above all else, he speaks his mind and doesn’t sugar-coat a damn thing.  The latest edition of Glorious is a tribute, of sorts, to wrestlers who have passed on.  Paul and James Guttman discuss Roma’s personal memories of such great stars as Andre The Giant, Hercules, Dino Bravo, Brian Pillman, Chris Benoit, Adrian Adonis, Owen Hart, Junkyard Dog, Curt Hennig, Dave Boy Smith, and more.  It’s a rare chance to hear about the lives these men lived and the great work they did to help the  fans who loved to watch them.  Plus, of course, Paul also shoots on the McMahons, cruel ribs, and the rookie he beat up in the third hour of a live Nitro…just to keep the show’s aura going.  You can read a full list of topics by heading to: http://www.worldwrestlinginsanity.com/am2/publish/newsnotes/Glorious7.shtml

On today’s special 45 minute edition of Glorious, Paul Roma and James Guttman look back at wrestlers who have passed away.  Paul is unique in that many wrestlers who were notoriously “hard to know” got along with Paul.  Because of this, Roma was able to share many personal stories about people like Dino Bravo and Andre The Giant, while other wrestlers may not have had the chance to truly get to know them.  One such star is Rick Rude, who Roma rode with on occasion.  Besides personal stories of the Ravishing One, Paul also shared a story with ClubWWI.com members of a rib that the wrestlers played on Rude and it was one meant to get him in trouble long after the show was over…

“I remember one time where they played a rib on him.  Remember how he used to go out there and dance over the woman (in the crowd) and then give her a kiss and all that?  Well these guys were notorious for trying to break marriages up.  To them, it was funny and they had this girl basically lock onto him and he knew nothing about it.  They’re all laughing in the back, saying ‘Oh.  Wait until his wife sees this.’  Blah, blah, blah.  How do you explain that to your wife?  Bad enough you’re kissing these women, but this girl locked on to you and basically slipped you the tongue.”

JG says, “Oh man,” and asks if it was a house show. Paul said it was a pay-per-view.  It was just one of many ribs the boys played on each other – including Paul.  Roma talks about the similar rib they tried to play on him in Australia plus other insane stories from Rick’s career including the Piper’s Pit comment that got Rude to stop shaving his chest…seriously.

Another star that Paul talked at length about was Ray “Hercules” Hernandez.  Roma’s history with Hercules is well documented.  On past editions of ClubWWI.com’s Glorious, Paul has spoken at length about his appreciation for Hernandez and all they did as a team.  Roma discusses the first time they met, the first match they had together, an amazing story of Ray’s charity work, and more.  In the end, Paul had a lot of respect for the partner he says he could communicate with without saying a word.

“Beyond phenomenal.  If I was gay, I would have married the guy.  We just got along so well.  The left hand always knew what the right hand was doing.  We – this is going to sound crazy – communicated without speaking.  We were on the same wavelength.  He’d walk over blurting something to me.  I’d blurt something back.  And it would be the same thing.  You know, what were going to do – whether it’s shoot the guy in and double clothesline, double slam, whatever the case may be.  Tremendous.  Tremendous family.  These are guys, I think, for the most part, they’re gone.  And as far as WWE is concerned, they’re forgotten.”

Guttman and Roma discuss the position that Vince McMahon is in with wrestler deaths and whether he’s been gun shy to acknowledge them because of media scrutiny.  Paul looks at that argument and shoots on the things WWE could do to help the fallen stars and their families.  After all, it’s not like Vince McMahon is hurting for money. Case in point, a headline James Guttman read on Drudge.  It was:

James says he knew who it was before he clicked the link and said, “Oh no.  He didn’t name his boat that, did he…?”  But there it was.  Vince McMahon owns a yacht called “Sexy Bitch.”  Guttman asks if this, with Linda now leading the Republican primary in polls, is just the start of all the anti-McMahon footage we’ll see. Paul laughs out loud and responds.

“Yeah.  You’re gonna see a lot of it.  They’re gonna pull out all the stops because they don’t want her to win.  Like any candidate, they’re gonna use any tactic they can…Is it going to hurt her?  Probably.  I hope not.  I’d like to see her get in…Let me ask you this.  Really?  Sexy Bitch?  You couldn’t come up with a better name?  Why not just called it WWE 1?  Or WWE 2?  3.  Whatever.  At the end of the day, (Vince McMahon)’s as intelligent as a stone wall.  He doesn’t think.  He just does it.  He’s an arrogant pompous ass.”

As always, Paul Roma mixes harsh shooting with hard-to-find stories in this – the most unique edition of Glorious to date.  This 46 minute ClubWWI.com show features talk of everything including the night Dino Bravo kicked him so hard in the head he went blind, riding with Chris Benoit on his first day in WCW, why Brian Pillman gave him the cold shoulder at first, Adrian Adonis’s clique, how he became friends with Andre the Giant, and much more.

There’s so much more to check out right now on ClubWWI.com.  With a brand new interview with Jesse Venutra, a new one set for Monday, and 200 others, there’s plenty to hear the moment you sign up. Remember this show and every other audio is available for MP3 download so you can take them on your phone or ipod. With tons of shows and over 200 interviews with everyone from Jesse Ventura to The Boogeyman, you’ll never be without something to listen to. Other shows featured include Erik Watts’s “MEGAWATTS,” Bull Buchanan’s “Bullpen,” D-Lo Brown’s “Lo-Down,” Orlando Jordan’s “Club O.J.,” and show archives from Tom Prichard and Ivory.