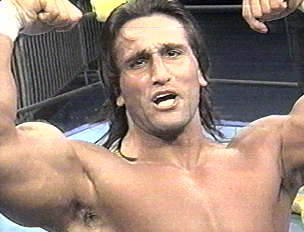 His two minute segment on the Four Horsemen DVD left people shocked and surprised. Now…we give him an hour. That’s right. In one of the most controversial interviews you’ll hear anywhere, Paul Roma speaks to ClubWWI.com for a sixty minute shoot that leaves no one unscathed.

Paul talks to James Guttman on ClubWWI about his entire career and doesn’t shy away from controversy. On the subject of drugs, Roma discusses faking drug tests for WWF wrestlers, Vince McMahon’s knowledge of drugs in his company, the night the wrestlers thought they killed Outback Jack, and more.

It doesn’t end there, though. Paul also speaks on his theory regarding the “murder” of Louie Spicolli, Vince’s burial of Power and Glory, wanting out of the Four Horsemen, being approached by TNA, being called the wrong name by Bruno Sammartino, his friendship with Hercules Hernandez, Randy Savage‘s head, how he got the name “Pretty,” and tons more. Seriously…tons more.

Paul’s far reaching statements on ClubWWI.com covered a number of different stars – spanning many different decades and no one was safe.

Triple H: “Helmsley…You suck, dude! You’re married to the boss’s daughter, who’s running the show…You’re gassed up and when you get off the gas, you shrivel and when you’re on the gas, you look like sh*t.”
(Paul speaks about Hunter’s comments about him on the Horsemen DVD, the hand Roma had in working with him during his early years in WCW, and more)
Ric Flair: “I took a lot of Ric’s spotlight…Who the chicks gonna go after? His old ass or me?”
(Roma discusses backstage stories of Horsemen partying, the reason he was brought into the Horsemen, how it was doomed from the start, wanting out, his surprising response to learning he would be a member, Flair’s retirement, and more)
John Cena: “John Cena, he sucks…He’s nothing. He’s absolutely nothing.”
Jim Powers: “It all goes back to what you do in the ring and separating who and what you are out of the ring. And Jimmy had a problem with that for a while. Not at the beginning, but as our notoriety grew, so did his head.”
(Paul talks about heat with Powers during their time as The Young Stallions, asking to end the team, what Jim did during a match between them that sent Roma over the edge, the WWF wrestler who confronted him about his heat with Jim, and more.)
Vince McMahon: “Vince knew. Vince was aware of him selling drugs to all the boys…Vince is a p*ssy.”
(Roma goes into detail on McMahon’s knowledge of drugs in wrestling, bringing drug doctor George Zahorian into the locker room, faking drug tests for fellow WWF stars, the “Kiss My Ass Club,” The Million Dollar Giveaway, and more)
Arn Anderson: “I’m teaming with a guy that looks like the Pillbury Dough Boy and I’m diesel.”
Hulk Hogan: “In real life, does he have control of his kid? No. He’s in jail. Does he have control of his life? No. He’s screwing his daughter’s publicist. He did it on the road, he’s doing it now. This time he got caught.”
The Entire WWE Roster: “You got all these bums wrestling in WWE. They suck.”
To hear all this and more, head over to ClubWWI.com. There’s so many topics that we can barely list them all. It’s a shoot that’s more than Pretty Controversial. It’ll leave you in shock.
Remember, there are well over 100 interviews are available on ClubWWI.com for less than five dollars a month. Among the other guests you can hear from are: Jesse Ventura, Terry Funk, Jerry Lawler, Vince Russo, Eric Bischoff, Ahmed Johnson, Bobby Heenan, Kevin Nash, The Iron Sheik, Sid Vicious, Paul Bearer, Bruno Sammartino, Sean Mooney, Scott D’Amore, Tito Santana, Al Snow, Tod Gordon, Charlie Haas, Tom Prichard, Jacques Rougeau, Rick Martel, Tammy Sytch, Too Cold Scorpio, Ole Anderson, Kid Kash, Ivan Koloff, Jackie Gayda, John Heidenreich, Jimmy Hart, Jimmy Valiant, Bad News Brown, Nick Bockwinkel, Dory Funk Jr, Diamond Dallas Page, Rob Conway, Sylvain Grenier, Buff Bagwell, Christian Cage, Jazz, Demolition Ax and Smash, Koko B. Ware, Ricky Morton, Dustin Rhodes, Damian Demento, Fred “Shockmaster” Ottman, Cpl. Kirchner, One Man Gang, Scott Steiner, Shawn Stasiak, Ted DiBiase, Ivory, Chris Masters, Elix Skipper, Kamala, Samoa Joe, Giant Bernard, Bill DeMott, Juvi “Juice” Guerrera, Nora “Molly Holly” Greenwald, Nick Dinsmore, Harley Race, Bull Buchanan, D-Lo Brown, Road Warrior Animal, Missing Link, Slick, Nidia, George Steele, Christy Hemme, Disco Inferno, Paul Ellering, Vito, Steve Blackman, Bushwhacker Luke, AJ Styles, Chris Daniels, Dennis Stamp, Shawn Daivari, Kevin Sullivan, B.G. James, Ron Killings, Zach Gowan, Dan Severn, Earl and Dave Hebner, Spike Dudley, Rodney Mack, Larry Zybszko, Rick Steiner, Mae Young, and many, more.