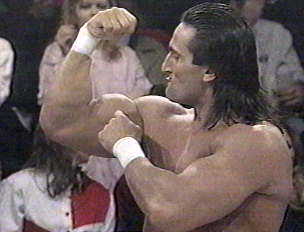 The most controversial online wrestling audio show, “Glorious” hosted by Paul Roma, has returned to ClubWWI.com for a brand new 55 minute edition along with James Guttman and once again, he’s not pulling any punches.  The full list of topics from the all new show can be found : right here

Paul Roma’s name has come up a lot lately as ClubWWI.com’s own Canadian Bulldog has started a petition to get him into the WWE Hall of Fame.  Never shy, Bulldog has been Tweeting the petition to various members of the wrestling community.

One notable response was from WWE’s “Goldust” Dustin Rhodes, who wrote back “why” and then promptly logged off.  James asks Roma about his thoughts on Dustin when they worked together in WCW, as well as Dustin’s reply, and Paul responds:

“I thought we got along well when I was there.  I thought he was a hell of a talent.  I think he went a little bit over the edge with the whole Goldust thing…Look, when something’s handed to you and somebody else comes on the scene and says, ‘Hey.  Let’s get this guy into the Hall of Fame.  Let’s give this guy a break.”  They always ask “why” because they never had to work for anything.  It was always handed to him.  His father wrestled before him and they’re going to push this guy because he’s Dusty Rhodes’s son.  So I can understand his question ‘why’.  I don’t know if anyone else understands it.  But that’s the reason why.  Because you get it all handed to you so why should anyone else get a break?”

Speaking of the previous generation, Guttman brings up this coming Monday’s old school Raw special.  JG says he’d rather see classic footage over older stars wearing their gimmicks past the expiration date.  Roma disagrees, but James asks if it would all be better if they appeared but just didn’t wrestle.  During Paul’s time, legends like Buddy Rogers were on the show, but they didn’t have matches and do physical things each week.  Everyone seems to be wrestling today.  The same can be said for the Divas.  That’s a subject Roma has a lot to say about.  He offers his thoughts on the female wrestling scene in WWE and his thoughts on why it exists.  He explains to ClubWWI.com members:

“I was channel surfing a few days back and WWE was on. There was a six-man, well six woman, match.  It was just unbearable…The finish was good.  Old school finish, which I liked.  But the whole match, what they do, just sucked.  It was really horrible and I looked at the crowd and nothing.  Absolutely nothing.  They couldn’t care less and I could see why.  I couldn’t care less.”

James says it makes no sense why WWE brings in beautiful women and then insists they smash their faces into the mat.  Why not just go back to the days of valets, managers, and non-wrestling roles.  Paul gives Club listeners his take on that too:

“You know why?  This is just my opinion.  I think Vince just gets off seeing women go at it with each other. What else can it be?  It sure as hell isn’t putting money in his pocket.  Because they can’t draw a crowd.”

For those unfamiliar with Paul Roma’s Glorious show, there is the misconception that he goes off on anyone and anything.  But that couldn’t be further from the truth.  In fact, while discussing Hulk Hogan‘s Rent-a-Center commercials and whether he and Ric Flair missed marketing opportunities, Roma took a moment to commend a star that many others have spent time trying to tear down – The Ultimate Warrior.  He’s mentioned it before during ClubWWI.com audios, but this time explains why we should give applaud the former WWE Champion…

“Listen, I give kudos to the Warrior.  He came in, made his mark, and left the business.  He goes around, does seminars, does public speaking – and good for him.  There’s a guy who, like I said, made his mark, made some money, and walked.  He could probably come back to wrestling.  It wasn’t like he took bumps.  His body’s well maintained.  You don’t hear from him.  You don’t see him crying to come back.”

Remember, Roma’s “Glorious” is just one audio among over 250 other big name guests from Jesse Ventura to Dennis Stamp available in uncut audio interviews the moment you sign up to ClubWWI.com!