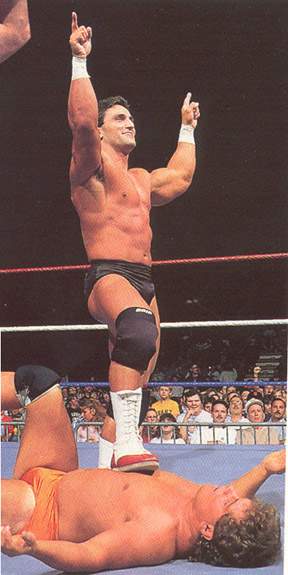 PAUL ROMA SHOOTS ON RICKY STEAMBOAT, THE STORY OF WHEN STEAMBOAT TRIED TO WORK STIFF WITH HIM AT MSG, WHY HE WOULDN’T RETURN TO WWE, AND MORE By WorldWrestlingInsanity.com

He’s the man you hate to love…but you know you do.  No one is safe as the one and only  Paul Roma returns ClubWWI.com for an audio event unlike any other.  So Notorious, it’s …” GLORIOUS!”

He’s the Internet’s favorite Horsemen and the man who causes hardcore fans to toss and turn at night with anger.  But above all else, he speaks his mind and doesn’t sugar-coat a damn thing.  This latest edition is no exception as Roma, joined by James Guttman, takes aim at everyone from Triple H to Virgil.  Plus, for those who think Paul speaks out of politics rather than genuine feelings – consider this.  How often do you hear an audio where the host tears into Vince McMahon for his manipulation of talent…and then goes on to whole-heartedly endorse his wife Linda for Senate?  No one has more shocks in store than Romeo Roma and it’s a show that you have to hear to believe.  From turning down wrestling conventions and shoot DVDs to why he’ll never return to WWE, Roma talks about it all.  You can read a full list of topics by heading to: http://www.worldwrestlinginsanity.com/am2/publish/newsnotes/Glorious9.shtml

Paul Roma kicks off the 47 minute edition of Glorious by talking to James Guttman about Monday’s edition of Raw.  Roma caught some of it, most notably the NXTsus beatdown of the WWE legends.  He talks about the horrible aging that some of them are dealing with, Vince’s manipulation of the legends, the New New World Order, and more.  Many fans hear Roma’s audios and assume he’s chomping at the bit for a wrestling return.  That couldn’t be further from the truth as Paul talks about turning down conventions and shoot DVDs but also the reason why a return to WWE for a NXT beatdown or something similar would just be a ridiculous choice at this point…

“Look do you think I would go in there and take the chance that one of these stooges isn’t going to put the boots to me and hurt me on purpose after I’ve been bashing these people for years?  Are you kidding me?  I’m gonna insult myself and have these next to nothings beat me down?  Is Steamboat that desperate that he needs that money?  How much did he get paid?  Probably not much.”

He and JG talk about wrestlers going to WWE after bashing them – only to be buried.  Goldberg‘s return, why Vince brought him in, Triple H’s influence, Stephanie’s “juice,” why Hunter will never be Hulk Hogan, and more.  From there, Paul takes aim at The Dragon directly and it’s not a pretty sight.  Roma worked with Ricky for much of his WWF tenure and explains why Steamboat may have agreed to all this and tells a story about a match with him at MSG that will shock ClubWWI.com listeners…

“I ran with Steamboat for a while.  You know, his ego gets him into trouble, I think.  I had a match with him at Madison Square Garden and we talked it over in the locker room.  He said, ‘OK.  I’d like to do this.’  I said, ‘OK.  I want to do this.’  Then, after I let him do his thing, he turned around and tried to stiff me and not let me do what I needed to do so I took it over.  I just physically did what I had to do to him.  Because I was like, you want me to make you look good and you’re not let me do my thing?  So I’m gonna do my thing anyway because physically he can’t handle me.  If you want to get down, we’ll get down.”

It doesn’t end there as Paul looks at the entire NXTsus angle including the current WWE role of his former partner Arn Anderson, Arn’s claims that Steamboat is the greatest ever, and more.  Also, Roma looks at self respect in the wrestling business, how WWE strings rookies along, how long a wrestler should stay in the business before realizing he won’t make it, gimmicks he thought were most embarrassing during his WWE years, the gimmick WWE pitched him, why it never happened, and tons more.  Seriously.  TONS more.

As we mentioned at the start, Paul’s ClubWWI.com shows always have balance.  After talking at length about McPolitics, the insane angle the WWF had Mean Gene pitch him, how he was punished for turning it down, why Mean Gene apologized years later, and more, Roma still has a firm approach to his feelings about Vince’s wife.  Despite his professional issues with the family, Paul thinks she’d make a great senator and has no problem speaking straight when it comes to that.

Guttman talks about Linda’s precarious spot right now and even some right wing pundits like Ann Coulter are calling for her to step down so Rob Simmons could challenge Richard Blumenthal for the Connecticut Senate seat.  Paul doesn’t like that.

There’s so much more to check out right now on ClubWWI.com. Remember this show and every other audio is available for MP3 download so you can take them on your phone or ipod. With tons of shows and over 250 interviews with everyone from Jesse Ventura to The Boogeyman, you’ll never be without something to listen to. Other shows featured include Erik Watts’s “MEGAWATTS,” Bull Buchanan’s “Bullpen,” D-Lo Brown’s “Lo-Down,” Orlando Jordan’s “Club O.J.,” and show archives from Tom Prichard and Ivory.