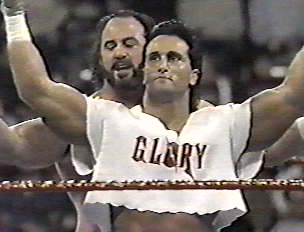 The 119th edition of JG’s Radio Free Insanity is on the air and available right now at WorldWrestlingInsanity.com (Flash and MP3 download) This week’s show features the controversial and outspoken Paul Roma.

James Guttman starts the show off by discussing this week’s hot button shoot. Paul Roma’s ClubWWI.com interview got a huge amount of reaction that went across the spectrum. Many were shocked by what he had to say and given the controversial guests that ClubWWI has welcomed in the past, which says a lot. Guys like Scott Steiner, Kid Kash, Ricky Morton, Tracey Smothers, The Iron Sheik, and others have all come to the Club and let their feeling be known. However, few can hold a candle to the things that Romeo Roma had to say during his one hour shoot. Paul gave new meaning to the phrase “hold nothing back” and, considering the reaction his brief appearance on the Horsemen DVD got, you can imagine the feathers he ruffled in a 60 minute ClubWWI discussion without any restrictions.

Paul Roma’s One Hour ClubWWI.com featured discussion of: Bruno Sammartino Calling Him the Wrong Name, Heat With Jim Powers, How Jim’s Ego Got Inflated, The Times They Wrestled Each Other Following The Breakup, What Jim Did Before Their Match That Angered Him, The Tag Team That Confronted Him About His Heat With Powers, Who’s Idea Power and Glory Was, Wanting Power and Glory Merchandise, Why Vince McMahon Wouldn’t Do It, Offering To Pay For It Himself, Coming Up With His Finisher With Hercules, The First Night They Did It, Their Feud With The Rockers, The Heel Turn, Deaths in Wrestling, The Night The Wrestlers Thought They Killed Outback Jack, How Vince Didn’t Care, Hulk Hogan‘s Ego, Hogan Knows Best, Ric Flair‘s Ego, Flair’s Actions Outside the Ring, The Night Hogan Couldn’t Follow Power and Glory, Randy Savage, The Changes to Savage’s Head, The Death of Elizabeth, Theories on Louie Spicolli’s “Murder, ” Why He Feels That Way, Triple H‘s Comments About Him on the Horsemen DVD, The Role Paul Played in Hunter’s Early Years, Arn Anderson, The Night He Found Out He Would Be a Horsemen, Fighting Uphill Right From The Start, Why The Horsemen Were Still Going, How He Got The Name “Pretty, ” Coming Up With “Pretty Wonderful”, Dr. Zahorian, Taking Urine Tests For Other WWF Wrestlers, Being Approached By TNA, What He Told Them, The Hart Foundation, Harsh Words For John Cena, How Today’s WWE Stars are Bums, The Million Dollar McMahon Giveaway, The Kiss My Ass Club, Vince McMahon – “Pu**y, ” The Wrestler He Beat Up In The Ring, Getting Fired From WCW For It, Mr. Fuji, The One Match He Never Had, His Current Career, Getting Out of Wrestling …and More.

JG then speaks about some emails he received from listeners who wondered why he didn’t call Paul out on some of his comments. Guttman explains that when he invites a guest on, the floor is theirs. He says he’s not here to correct someone’s thinking or engage them in debate. Had he invited Paul on to talk about a particular subject, then they could have had conflicting views. However, the whole reason for the invite was to hear Roma’s story. Had he engaged in debate, listeners wouldn’t have heard that.

At the risk of sounding like a commercial, James mentions that this is something he discusses at length in his upcoming book, “World Wrestling Insanity Presents: Shoot First…Ask Questions Later.” He brings up other guests who have said things he didn’t agree with or were historically inaccurate.

From there, James speaks about ClubWWI.com Audio Host D-Lo Brown returning to WWE. Everyone at World Wrestling Insanity wishes D-Lo the best as he returns to the company he belongs with. Much like Tom Prichard before him, Brown was a big part of World Wrestling Insanity as host of his own audio show and didn’t hold back on the “Lo-Down.” It’s a great example of how the image of the Insanity has changed through the years. Archives of D-Lo Brown’s “Lo-Down,” Tom Prichard’s “Tuesdays with Tom,” and Ivory‘s “Smacktalk” can all be heard on ClubWWI.com. Plus, you can check out Bull Buchanan’s “Bullpen,” Kevin Kelly’s “Big Picture,” and Orlando Jordan’s “Club O.J.”

With that, Guttman cues up clips from Paul Roma’s explosive one hour ClubWWI.com shoot interview.

James Guttman starts the show off by welcoming Paul Roma. He asks Paul to fill listeners in on how things are by him. Roma answers that he’s not sure if fans know that he works for an office company now selling computer technology. WWE actually did a spread on him for their website a little while back. JG mentions that some wrestlers have a hard time transitioning from wrestling to a regular world job. He asks the former Horseman how the transition was for him.

“Well, it took me a while. It’s hard walking away from travelling all the time and doing something you really love as far as wrestling is concerned. But this is nice. I’m home every night and I’m doing well for myself.”

In progress, Roma is speaking about deaths in wrestling and the people who have died from his era. JG agrees with him and brings up Marc Mero’s list. The problem is that Marc included names like JYD, Earthquake, and Owen Hart – who didn’t die from drugs. James says that if Mero had just included the Rick Rudes and Louie Spicollis, his argument would have been harder to pick apart. That’s when Paul jumps in with a bombshell…

“I think Louie Spicolli was murdered. I talked to some guy who did an interview, he worked for some newspaper or something like that and he never, never got back to me. I told him. I said, ‘Dude. Think about it.’ I knew Louie Spicolli. Louie Spicolli, his dream was to sign a contract with WCW. That was his dream, man. And he did. So why would he overdo it and kill himself? Now being in the business as long as I have, if they ever really dug deep and checked into it, they’d find the drugs and drinking that killed him, in his body, they’ll find out it’s one drug in particular that all the guys used to use to get people into a state where they could do whatever they want to them. Like a date rape drug.. Now I would take the people that he was out with that night and I would grill them. And I’m telling you. Somebody dropped drugs into his drinks until he died..”

– In the uncut ClubWWI.com shoot, Paul goes on to speak about Miss Elizabeth‘s death and the things he did to bring his theory to Spicolli’s family –

Roma says that he doesn’t feel this was done on purpose. Guttman says “a rib gone wrong?” Paul agrees and says “Absolutely.”
“Maybe someday it will come out. Maybe this guy (who did it) will grow a conscience and say, ‘I can’t live with myself anymore.’ Or the person that was with him or some other people will say, ‘You know, okay. This is what went down.’ I don’t know. I don’t know, but I’m never gonna change my mind about what happened. Louie Spicolli was a super dude. A super dude and to want it that long and to sign, when I heard he signed, I went, ‘That’s great.’ I was so happy for this kid and then somebody went, ‘He’s dead.’ I went, ‘What do you mean he’s dead?'”

James says that it’s the first he’s heard of this, it sounds viable given the stories you hear of backstage ribs. Some are more dangerous than fans hear about and the invincible feeling wrestlers have about themselves and each other. Paul offers one such story.

“Well, they thought they killed Outback Jack one night…Yup. Swallowed a handful. Thought they killed him. They had to go back to his room and check him. He was sitting in a chair, just drooling. They thought he was dead.. You tell me, man. That’s why I just don’t believe it. But, you know what, I’m not Spicolli’s family. I have no idea how to get a hold of these people. Don’t even know if they even want to hear about it. I don’t even know if this guy even told them what I said.. But he never got back to me. He was some newspaper reporter. Nothing. Never heard back again. So.”

Remember, Paul’s full ClubWWI.com shoot lasted for one full hour and was one of the most controversial ones you’ll ever hear. Among the topics and quotes you can hear are:

Triple H: “Helmsley…You suck, dude! You’re married to the boss’s daughter, who’s running the show…You’re gassed up and when you get off the gas, you shrivel and when you’re on the gas, you look like sh*t.”

(Paul speaks about Hunter’s comments about him on the Horsemen DVD, the hand Roma had in working with him during his early years in WCW, and more)

Ric Flair: “I took a lot of Ric’s spotlight…Who the chicks gonna go after? His old ass or me?”

(Roma discusses backstage stories of Horsemen partying, the reason he was brought into the Horsemen, how it was doomed from the start, wanting out, his surprising response to learning he would be a member, Flair’s retirement, and more)

John Cena: “John Cena, he sucks…He’s nothing. He’s absolutely nothing.”

Jim Powers: “It all goes back to what you do in the ring and separating who and what you are out of the ring. And Jimmy had a problem with that for a while. Not at the beginning, but as our notoriety grew, so did his head.”

(Paul talks about heat with Powers during their time as The Young Stallions, asking to end the team, what Jim did during a match between them that sent Roma over the edge, the WWF wrestler who confronted him about his heat with Jim, and more.)

Vince McMahon: “Vince knew. Vince was aware of him selling drugs to all the boys…Vince is a p*ssy.”

Arn Anderson: “I’m teaming with a guy that looks like the Pillsbury Dough Boy and I’m diesel.”

The Entire WWE Roster: “You got all these bums wrestling in WWE. They suck.”