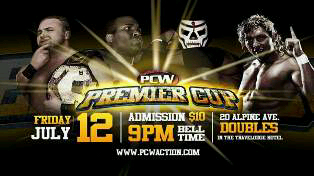 WINNIPEG – Premier Championship Wrestling (PCW) is proud to announce the Return of the Best One Night Pro Wrestling Tournament in Central Canada – THE PREMIER CUP on Friday July 12th at Doubles Fun Club in Winnipeg!

“The Premier Cup has been a staple of PCW’s history for many years and we are very excited to bring it back to Winnipeg,” said PCW Chairman Andrew Shallcross. “In the past this tournament has featured some of the most exciting, high flying and technical bouts in PCW’s 11 Year History. This is the night where every PCW athlete wants to be a show stealer! Plus, all of the Previous Premier Cup Winners are Already Confirmed to return for July 12th!!”

Here are the athletes already confirmed for July 12th, all of them Previous Premier Cup WInners!!

More Competitors to be announced in the coming days!

“The World’s Skinniest DJ” CHRIS REID from POWER 97 will also be on hand, returning to his Ring Announcing Roots at PCW’s PREMIER CUP
www.Power97.com

Keep an eye out for the stars of PCW on SHAW TV!! Wednesday Nights at 1130PM, check the schedule for repeat episodes!!