Pete Doherty talks about jobbing out in WWF 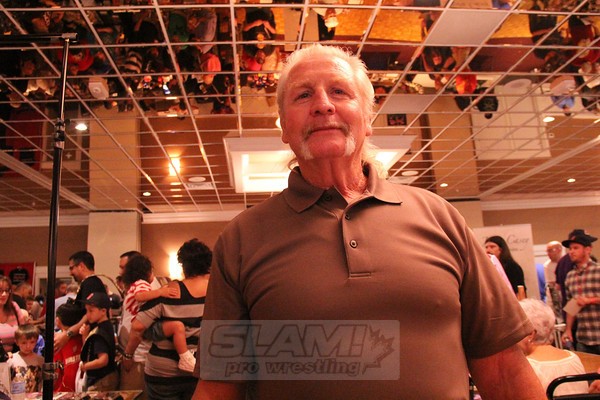 This interview is available for listening at http://www.iyhwrestling.com/viewnews.php?autoid=24614.

Tell us about your time wrestling as ‘The Golden Terror’?

“That was a good gimmick. The only thing I didn’t like about it; I should have had a different outfit on because what I had on was this heavy outfit that covered me from top to bottom. I would perspire; I would lose about three to four pounds every time I wrestled in that outfit. So I’d have to afterwards eat like a horse to try and keep the weight on…That was a good gimmick; I enjoyed that. I should have stayed with it longer than what I did, but I didn’t like wrestling in the outfit; I really didn’t. I told Vince McMahon that, and I don’t think he was too happy with it because he said that was his idea to begin with…Now, it’s one of the best gimmicks I have going. I go out to these signings, everybody wants to take a picture with that outfit, so it’s worked out well for me I guess in the long run.”

When you starting commentating, you did some work with Nick Bockwinkel. Since you are two very different people, how did that combination work out?

“It went good, because you don’t want two people of the same character. You want different characters, and it you notice that’s how they do it today. Each guy has his own style. If they all had the same style, it would get boring. If you get two or three guys with a different style, it makes the mix go a lot better; it makes for a better commentary all around.”

Other topics discussed included:
* Was there anyone he hated jobbing for?
* Who did he enjoy traveling with?
* How long was he with the WWWF/WWF?
* What was it like to appear on the first episode of “Saturday Night’s Main Event”?

Pete will be appearing at the New England Pro Wrestling FanFest 2014 on Saturday, June 21, 2014 at the Crowne Plaza Hotel in Warwick, Rhode Island. For additional information, go to http://nepwhof.weebly.com/.