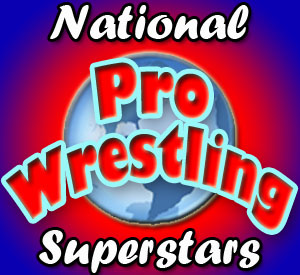 Here is a recap of the show:

Saturday night August 18th, NPWS concluded its double-tournament weekend at the Belleville, NJ Knights of Columbus Hall with the biggest annual wrestling event in the tri-state area, the 2012 Chris Candido Memorial J-Cup Tournament. It may have been the biggest event of the year, but NPWS management will be honest as always in admitting it was the smallest crowd ever for a J-Cup event… and the fans who didn’t attend (shame on them) missed an exciting night of wrestling action.

The show opened with the introduction of the eighteen members of the Class Of 2012:

Ring announcer Johnny Falco explained the tournament rules. The Qualifying Round would consist of six Triple-Threat Elimination Matches. Each match would have a ten-minute time-limit, with a five-minute sudden-death overtime period if no winner. If after the five-minute overtime there was still no winner, the fans would vote for the winner. The Semifinal Round would consist of three one-on-one matches with the same time limit and overtime rules. The three Semifinal winners will face off in a Triple-Threat Elimination Final Match with *no* time limit.

Chris Candido’s younger brother Johnny Candido, who would be presenting the trophy to the winner at the end of the night, was introduced, and the wrestlers and fans paid tribute to Chris.

In the first Semifinal Round Match, Chris “Boom Boom” Powers took on CZW star Devon Moore. The rising star Powers made a good effort against the south Philadelphia veteran, but after kicking out of a moonsault and pin attempt, Devon leveled Powers with a kick to the head and pinned him 1-2-3.
Winner and advancing to the Finals: Devon Moore

In the second Semifinal Round match, 2011 J-Cup Tournament winner NPWS Jersey Shore Champion “The Love Machine” Nicky Oceans took on “Too Hot” Steve Scott. Oceans attacked Scott early, but Scott battled back and kept Oceans from putting him away. Towards the end Scott roared back, and after planting Oceans into the mat with a German Suplex, he appeared to have the match won, when J.D. Smoothie came out to ringside to once again distract the referee. As Scott went over to deal with Smoothie, Mike Dennis snuck into the ring and took down Scott with an F-5. Oceans finished off Scott with a running knee and pinned him 1-2-3.
Winner and advancing to the Finals: “The Love Machine” Nicky Oceans

In the third and final Semifinal Round Match, ROH star and 2008 J-Cup Tournament winner Rhett “The Threat” Titus took on NPWS Junior Heavyweight Champion “Jersey Shore Jock” Mike Dennis. Dennis offered to shake hands, and Titus took him up on it, but was ready when Dennis tried to sneak in a kick, and the two traded wrestling holds for the next few minutes to the delight of the crowd. After surviving a flurry of offense from Titus, Dennis roared back but could not put Titus away. Then Nicky Oceans came down to the ring holding a Wet Floor sign, apparently intending to return the favor and help Dennis, but when he aimed at Titus, Titus ducked and Oceans leveled Dennis instead. Titus clotheslined Oceans out of the ring, then DDT’ed Dennis and pinned him.
Winner and advancing to the Finals: Rhett “The Threat” Titus

The next match was originally scheduled to be a one-on-one Ladies Match between WSU stars Jennifer Cruz and Kimberly, but Kimberly came out with NPWS newcomer Nikki Rich. Then out came Jennifer Cruz. Still smarting from her defeat last the previous night, she accused NPWS of conspiring to make her wrestle in a Handicap Match, but she announced she had a partner of her own, “the sexiest and most voluptuous partner”… then the music hit and out came “The Cold-Hearted Playa” Danny Demanto! Laughing, Demanto expressed confidence that Cruz could handle things herself, but Kimberly proved to be a tough opponent, and even the rookie Nikki was able to hold her own against Cruz, then Cruz finally tagged in Demanto, and the two double-teamed her for the next few minutes, Demanto even embarassing Nikki by spanking her, but when Demanto went for a powerbomb, Nikki slipped out and tagged in Kimberly. Kimberly used her quickness to surprise Demanto and take him down with a rolling DDT and a hurricanrana. Kimberly and Nikki went for a double suplex on Demanto, but Cruz broke it up and tossed Kimberly out of the ring, while Demanto hit a piledriver on the hapless Nikki and pinned her 1-2-3.
Winners: “The Cold-Hearted Playa” Danny Demanto & Jennifer Cruz

The Final Match of the Tournament was a Triple-Threat Elimination Match between semifinalists CZW star Devon Moore, ROH star and 2008 J-Cup Tournament winner Rhett “The Threat” Titus, and 2011 J-Cup Tournament winner NPWS Jersey Shore Champion “The Love Machine” Nicky Oceans. Oceans initially ducked out of the ring to allow Titus and Devon to face off, but he quickly returned to the ring, and the three battled back and forth. Frustrated by his inability to put his opponents away, Oceans jumped out of the ring and menaced long-time NPWS fan Robert Puglisi, who had been taunting him all night after Oceans had tried to attack him the night before. Titus threw Oceans back into the ring and the three-way battle continued. After Titus broke up a superplex attempt by Oceans on Devon with a Tower Of Doom Powerbomb, Oceans left the ring once again and attacked Puglisi, putting him in a Full-Nelson and refusing to break the hold, and was eventually counted out by the referee and eliminated. Devon and Titus continued to battle back and forth, bringing the crowd to the edge of their seats, until a series of flying kicks from Devon helped him finally put Titus down for the 1-2-3.
Winner and 2012 Chris Candido Memorial J-Cup Tournament Champion: Devon Moore

Johnny Candido brought the trophy to the ring, as the other competitors in the tournament came out from the locker room to congratulate Devon.

The victory celebration was abruptly interrupted by the appearance of former ECW star John “Balls” Mahoney, who seized the microphone and got in Johnny Candido’s face. He apologized to Devon for interrupting the victory celebration, but he had to get this off his chest. Balls said that a year after Chris had died, and WWE had offered him a contract, they asked him to recommend a tag-team partner for him, and he immediately suggested Johnny, but Johnny had turned it down. Johnny claimed that he turned down the contract because his perspective on wrestling had changed since his brother died, but Balls accused Johnny of being afraid to be cut off from his family money if he wrestled (as he said Chris had been). The angry words soon led to punches flying between the two. The other wrestlers tried to keep them apart, but the two kept lunging at each other and fighting on the floor and all the way to the back.

As order was finally restored, Devon returned to celebrating with his trophy, as the show closed.

Related Itemsnpws
← Previous Story CRW in St. Leonard, Quebec, Canada on 9/7
Next Story → EWF returns to Converse, IN this Saturday with Jim Duggan, Demolition, and Doink!