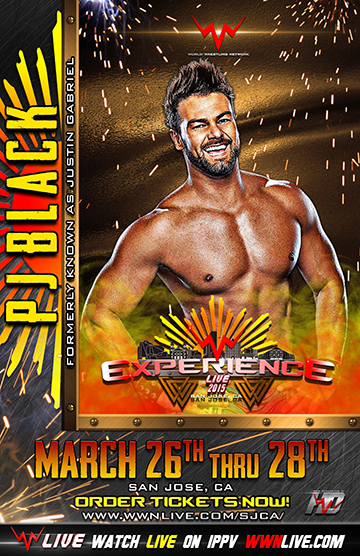 It’s Wrestleman…., er, we mean WWNLive Experience season at the WWN offices and the big announcements for the events on March 26th-28th start right now….

Click here for all the info on The WWNLive Experience in San Jose including EVOLVE on March 26th & 27th and the WWN Supershow on March 28th. We have reduced ticket prices from last year! In addition, we have increased the savings and perks of the Total Experience tickets that also include King Of Indies Tournament, SHIMMER and Kaiju Big Battel. These events are just a few miles from all the Wrestlemania activity.

The new EVOLVE Recap was released today featuring Ronin in action, So Cal Val’s debut, a fight into the streets between Drew Galloway and Roderick Strong and the face off between champions plus more. Can you spot the Rosebud?

Austin Aries & Roderick Strong changed history and became the best tag team on the planet roughly ten years ago as Generation Next. Since they have gone their separate ways, they have won World Titles and been involved in some of the best matches anywhere. Aries and Strong will reunite as Generation Next for the first time in years for one-day-only at the WWN Supershow on March 28th. Who will they face? We’ll reveal below.

We regret to inform you that Anthony Nese will be unable to make the WWNLive Experience. In surprising news, the Premier Athlete Brand has announced that Brian Cage will replace him.

We are happy to announce that Uhaa Nation has been added to both EVOLVE cards and the WWN Supershow at the WWNLive Experience.

WWN is letting the established stars book new talent into EVOLVE. This can be a known star, an upcomer, an international wrestler, basically anyone. We saw Rich Swann endorse and bring Shane Strickland to EVOLVE 36 and EVOLVE 37. Chris Hero has stepped up and endorsed European sensation Tommy End. You will see Tommy End in action at EVOLVE and the WWN Supershow at the WWN Experience!

We have one of the top matches for each EVOLVE card and the WWN Supershow signed. In each upcoming WWN Alerts, we will fill out the lineups and add more talent. Let’s get started:

No Restriction, No Limits – Non-Title

We need to remind you that also confirmed for all three events are:

Thank you for reading this WWN Alerts. What do you think of the announcements? Tweet using hashtag #WWNLive and let us know! We’ll be back soon with even more announcements. Have a great evening!