PRESS RELEASE: Mad Dogs, Midgets and Screw Jobs: The Untold Story of How Montreal Shaped the World of Wrestling 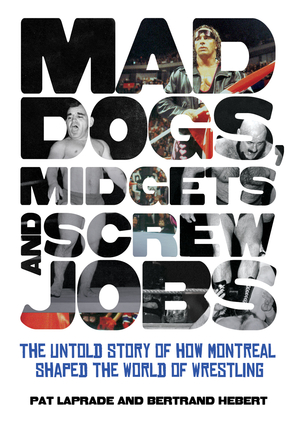 “Beyond a shadow of a doubt, the most complete book ever written on pro wrestling in Montreal.” — Gino Brito

The proving ground for some of the biggest names in wrestling — including Andre the Giant, Abdullah the Butcher, and Mad Dog Vachon — Montreal was also the site of the first midget battle ever and made famous worldwide for the Survivor Series screw job. Mad Dogs, Midgets and Screw Jobs: The Untold Story of How Montreal Shaped the World of Wrestling (ECW Press, February 2013) is the ultimate guide to Montreal’s legendary place in professional wrestling history.

Get the lowdown on all the major wrestlers who made their names in Montreal, from Yvon Robert, the Rougeaus, and Gino Brito to Édouard Carpentier. Based on countless hours of research and over 100 original interviews, and featuring more than 200 exclusive photos, Mad Dogs, Midgets and Screw Jobs is a fascinating history of one of the hottest wrestling territories of all time.

Pat Laprade is well known within the Montreal wrestling community as the creator of the first Quebec wrestling HOF and the year-end RDS, SLAM! Wrestling and the Wrestling Observer websites.

Bertrand Hébert has been involved in the Montreal wrestling scene for close to twenty years. For a decade, he was the Pro Wrestling Illustrated correspondent for the territory. In the 1990s, he was the mind behind Northern Championship Wrestling and helped usher the Montreal territory into the independent era.

Title:  Mad Dogs, Midgets and Screw Jobs: The Untold Story of How Montreal Shaped the World of Wrestling

NOTE:  The authors of this book will join OWW Radio for an interview in the next few months.  Stay tuned!