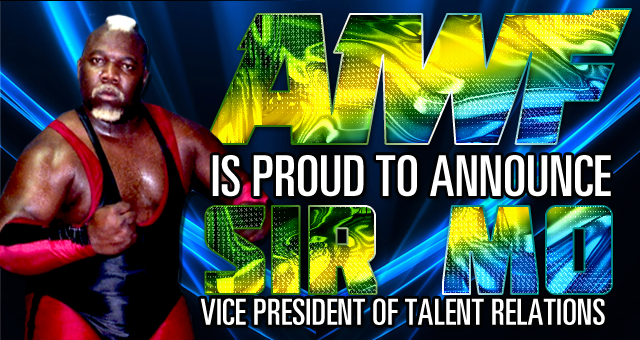 AIWF Senior Executive Vice President Tim Dolan announced recently that in an effort to further solidify the AIWF’s prominence we are pleased to introduce Bobby Horne as Vice President of Talent Relations.  Most people will remember Mr. Horne as Sir Mo from his WWF days as a member of Men on a Mission, a tag team with his former partner Mabel (Viscera).

“We are excited to have Sir Mo on board with the AIWF, and cannot wait to see where this ride takes us.  Mo brings a wealth of experience to the AIWF, and we here at the AIWF Headquarters are excited for where he can take the future of the AIWF.” Sir Mo’s position will entail a variety of tasks, including an Ambassador role for new members, as well as assisting in bridging members together for the betterment of all involved.  With this transition and new position, Sir Mo will represent the AIWF’s voice on decisions to talent and members.

AIWF (Allied Independent Wrestling Federations) was founded in 1992 in Mount Airy, NC by Dean Puckett.  Twenty years later, the AIWF is still a staple in the North Carolina Pro Wrestling scene, and now with members across the globe they hold a large share of the independent wrestling world.

Sir Mo (Bobby Horne) began wrestling in 1991 as Bobby Knight, 1/2 of the Harlem Knights in the Pro Wrestling Federation based out of Charlotte, NC.  Their success sent them to the old USWA in Memphis, TN, where they were signed to a WWF Contract to become Men on a Mission.  The former WWF World Tag Team Champion has traveled the world wrestling, and brings a vast knowledge of wrestling to the AIWF.