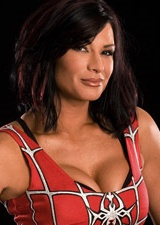 A new pizzeria is taking shape in the Lincoln Park neighborhood of Chicago and the owner is professional wrestler Lisa Marie Varon. The Squared Circle, which is a term often used by wrestling promoters to refer to the ring, is located at 2418 North Ashland and will feature house-ground burgers, brick oven style pizzas and a full bar.

Formerly Leon’s Ribs, The Squared Circle will accommodate approximately 48 patrons in addition to 15 seats in the bar area. Autographed wrestling memorabilia will adorn the walls and TVs will showcase live sports including wrestling PPVs.

Varon’s husband, Lee, will head up the kitchen which will include a custom-built brick oven. “I could not be more excited about returning to Chicago, and about bringing my concept to one of the greatest food cities in the world,” explains Varon.

Varon is currently on board with TNA’s Impact Wrestling as “Tara” where she is one of their biggest stars and can be seen every Thursday night at Spike TV.

On Thursday, March 14th at 7:00 pm she will join wrestlers Hulk Hogan, “The Icon” Sting, Bully Ray, Austin Aries, Velvet Sky and many more to perform at Impact Wrestling at The Sears Centre. Tickets are available at Ticketmaster.

The Squared Circle will be open for business beginning Thursday, March 14th.