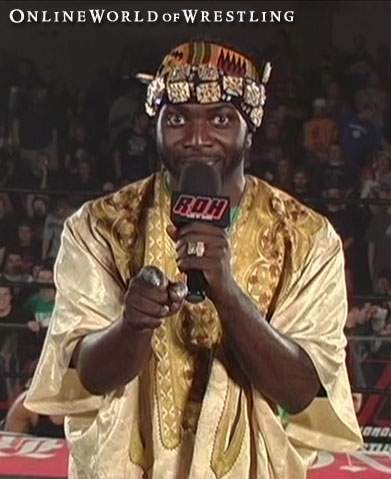 Prince Nana Comments On Matt Striker’s SmackDown Mention Of Himself/His Comparisons To WWE Intercontinental Champion Kofi Kingston & Discusses The Current State Of The Embassy In Ring Of Honor/The Group’s Future, Adding Necro Butcher Into The Embassy’s Fold, Plus His Reaction TO ROH’s Death Before Dishonor VIII, & His Thoughts Of Bryan Danielson Possibly Returning To Ring Of Honor

Ring of Honor’s Prince Nana was one of the special guests on this week’s live edition (06/28/09) of the award-winning Monday Night Mayhem (presented by Good Health Natural Foods). You can feel The Mayhem live every Monday night (at 7PM ET/6PM CT), exclusively on The Monday Night Mayhem Radio Network (www.MondayNightMayhem.com

The leader of The Embassy joined The Big Mosh, Jimmy Noonan, & “The Chairman of the Board” Todd Vincent in his return to “Your Home of Wrestling Radio” (to preview the forthcoming ROH on HDNet tapings/Ring of Honor’s return to Philadelphia), which is now available in Windows Streaming Media or via Monday Night Mayhem’s official Podcast on iTunes:

The state of The Embassy & the group’s future in Ring of Honor: “People have been writing online saying that ‘You guys are hokey-pokey’ and that we look like some kind of stepping stone for wrestlers in the wrestling business. But when you are putting pieces of the puzzle together, when you are dealing with large corporations, and when you are dealing with money, I have to move forward. Joey Ryan is going to be back in the fold, but you gotta remember that we have a tag team in Necro Butcher & Erick Stevens. So, The Kings of Wrestling (ROH Tag Team Champions); it’s a great feat for my good friend & associate Claudio Castagnoli to have the Tag Team Titles, but he also has to look over his back. And not only does he have to look over his back, but so does that loser Tyler Black.”

Nana’s background as a wrestler, his early days with Ring of Honor, & how that together has shaped him in being a manager today: “The #1 reason is that I’m a wrestler. I am a trained wrestler from Johnny Rodz, and it’s really about getting in that ring and bossing them around. You have to back at the history of Prince Nana and forget about Ring of Honor for a second. When you’re talking about Prince Nana, you’re talking about 1999 & 2000, when I was having matches with Xavier (the second-ever Ring of Honor World Champion), and then with Low Ki. I was in the ring taking the bumps, getting the bruises. A lot of people haven’t done it, not saying they won’t do it, but they haven’t done it yet. You have to get in that ring, you have to take the bumps, and you have to know what it is that your guy is going through.”

Being referenced on-air by Matt Striker during Kofi Kingston match on WWE’s Friday Night SmackDown on May 7th: “Matt Striker definitely came at me with a sign of respect. He knows, and everybody else knows the history; so like I said, I control the environment. Things happen for a reason. Am I happy they name dropped me? We could go have a party, just like we had a party the other day when Ghana busted the U.S. Matt Striker, my hat’s off to that guy. I think it was a sign of respect.”
Want to know Prince Nana’s thoughts on Ghana upsetting the United States in the 2010 World Cup, along with his exclusive comments on bringing Necro Butcher into The Embassy, his reaction to Ring of Honor’s successful Death Before Dishonor VIII event from Toronto, the comparisons of himself by fans to WWE’s current Intercontinental Champion Kofi Kingston, & Bryan Danielson’s future in ROH? The answers to these questions/subjects are found only on “Your Home of Wrestling Radio,” as the man who proudly waves the flag of Ghana, West Africa steps into the squared circle of Monday Night Mayhem. Follow Prince Nana right now on Twitter by logging onto http://www.Twitter.com/PrinceKingNana. Don’t forget to head on over to http://www.ROHWrestling.com during the holiday weekend to purchase your tickets to Ring of Honor’s forthcoming live events in Philadelphia, St. Louis, Chicago, & “The Bluegrass Brawl” in Louisville, and be sure to check out ROH on HDNet every Monday night at 8 & 11PM ET.