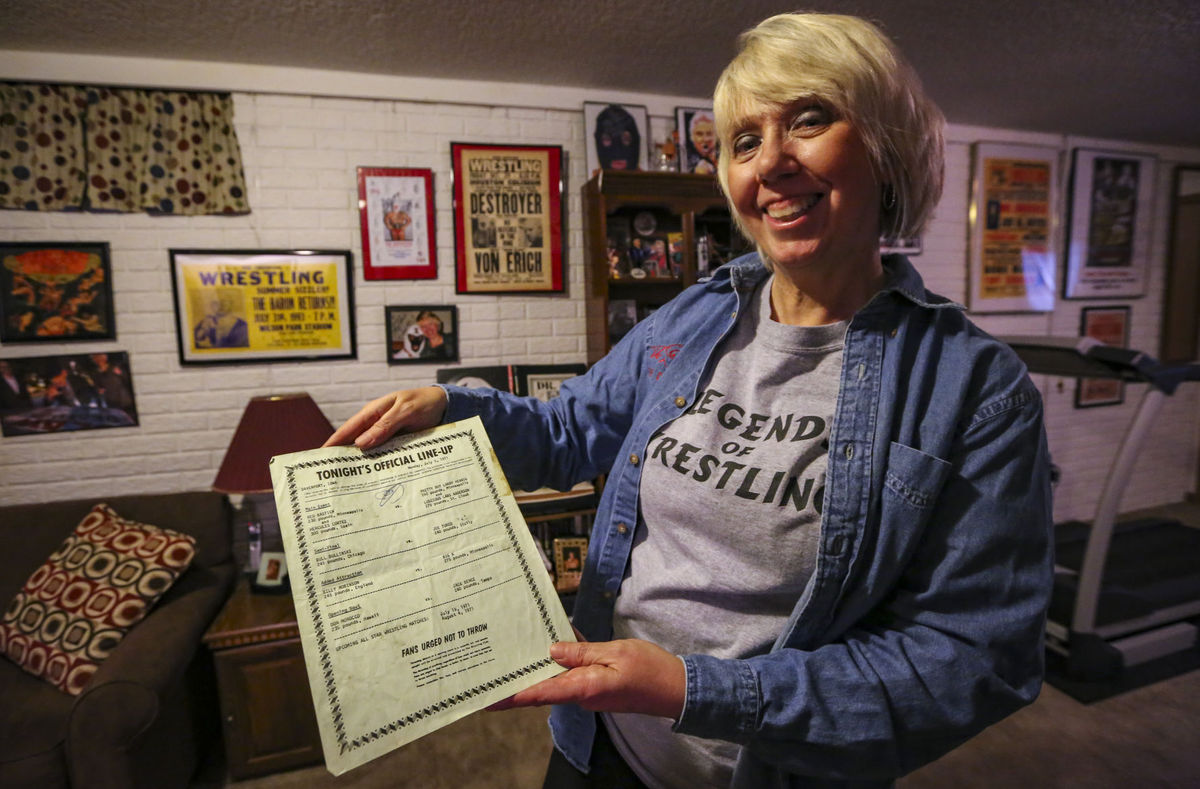 On the surface, nothing peculiar sticks out at Joyce Paustian’s two-story residence tucked in a cul-de-sac just north of 53rd Street in Davenport.

Inside, framed photographs of eagles and Quad-City bridges shot by Paustian and her husband, Woody Perkins, decorate the walls on the first and second floors.

Hardly anything, except for a caricature sketch of the couple drawn at the Wisconsin State Fair in 2015, hints at Paustian’s passion she closets in her basement-turned-“fan cave.”

Since her early teenage years in the early 1970s, the lifelong Davenport resident has accumulated a massive collection of professional wrestling memorabilia.

“It’s the biggest it’s ever been,” said Paustian, a retired Rock Island Arsenal employee who worked there for 36 years. “It’s its own museum now.”

Over the past 45 years, Paustian has acquired thousands of items, including photographs, magazines, posters and action figures that now blanket the walls in the lower level of her home.

A framed promotional poster for “The Wrestler,” a 1974 film produced by the late Olympic grappling great Verne Gagne, greets visitors at the bottom of the stairwell.

“I finally just had to focus on the ones I really liked,” she said, referring to materials related to her favorite wrestlers.

Prior to the commercialization of professional wrestling, Paustian snapped photos of her “heroes” in action, a practice that became her pastime.

Today, she’s dedicated separate areas of the downstairs to her three famed giants she grew up watching on television, cheering from the stands and photographing ringside:

Paustian recalled watching the sport on her black-and-white TV for the first time in 1969 and going to her first event as a 13-year-old in 1971 at Davenport’s John O’Donnell Stadium, known now as Modern Woodmen Park.

Editor’s note: Look for reporter Jack Cullen’s Notes @ Noon Tuesday, Thursday and Friday online at noon. He captures various sides of life in the Quad-Cities. Contact him at [email protected] or 563-383-2363.