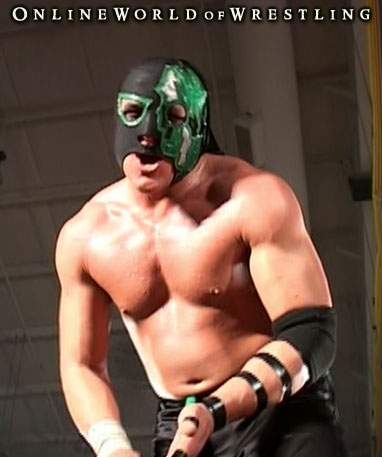 Courtesy of Brett A.  Schwan at http://wrestlingclothesline.com/SchwanPWR1-10.htm

On Sunday afternoon, January 24th, Pro Wrestling Respect made their debut at the National Guard Armory in Burlington, NJ in front of a standing room only crowd.

The location was great, easily accessible from the NJ Turnpike, and had plenty of parking. Prices were a mere $5 in advance and $8 at the door. (Granted, when you throw in tolls and gas from Long Island, it adds up but we were determined to go as soon as MsChif was announced as appearing.)

Luminaries in attendance included Ron, Murph, Sean Murphy, Nephew Murphy, Joe (with an e), Joey, Kathy Fitz, and Sure Shot Scott (who was kind enough to supply me with the names of those wrestlers I had forgotten by the time I started writing this.)

The show opened at exactly 4:00 with the opening match featuring Big Bad Bobby Dempsey vs Rhett Titus. Very enjoyable opening match until Joe (with an e) pointed out how much Dempsey resembles a mix of Axl Rotten and Super Crazy. Lots of back and forth action which saw Dempsey get the pinfall. Great opening match.

Match three (and the reason most of my crew came to the show) saw MsChif take on Jamilia Craft. Evidentially, only my crew came to see MsChif. More than half of the crowd went nuts for Jamilia (whom I believe was having her first professional match in front of a live crowd). Grizzly Redwood (who Joe describes as a Necro Butcher Shrinky Dink) was Special Guest Referee. Very good match, especially for the new comer. At one point Jamilia lost her mask. Oops. MsChif ended up hitting the desecrater for the pinfall. I have yet to see MsChif have a bad match.

Chelso Rivera with Agent Sly Stetson defeated the Gold Ninja in a matter of seconds. Stetson got on the mic and demanded better competition. A second ninja, this time Red, entered and was defeated in seconds. Stetson again got on the mic and asked if there were any pirates, clowns, or horses in the back willing to face his man. Pelle Primeau entered the ring and put up a good fight before losing to Rivera.

Intermission saw several of the wrestlers come out to meet and sign/pose for photos with the fans. MsChif was charging a mere $5 for a great selection of 8 x 10’s. She gladly signed anything and took photos for free. (A far cry from the ridiculous $25 price tag I was told Madison Rayne was charging at a show the night before). We talked about her last appearance in the area, a 2005 match for IWA MS in Philly. I asked her to come back to the area more often and she told me to get some promoters to book her. ATTENTION AREA PROMOTERS!! BOOK MSCHIF! Daizee Haze and Bobby Dempsey were also selling their merch. The longest line (most likely because she had the most friends and family in attendance) belonged to Jamilia Craft.

The 15 minute intermission ended and we were ready for the second half of the show.

Next up a Six Man Tag Team Match Alex Payne’s Team vs. Shane Hagadorn’s Team. Both captains each selected 2 graduates from the ROH Academy as their partners. The teams ended up being Shane Hagadorn, Rob Wolf and Christian Mevin defeating Alex Payne, Prof. Milo Shizo, and Jacob Chambers. The end came when Hagadorn nailed one of the students on Payne’s team with a foreign object for the pinfall.

The next bout was the “Elevation Lottery”. The stipulation here was that the winner will face the winner of the Delirious vs. Ricky Reyes main event at a future Respect show for a chance to elevate their career and earn respect. Andy “Right Leg” Ridge defeated “Freshly Squeezed” Orange Cassidy in a match that far exceeded any of our expectations. Cassidy tried to begin a chant of “I am Orange Cassidy and I am the best.” For one reason or another, it really never took off. Cassidy took an early beating and escaped to the floor, on several occasions, for a breather (and a sip of his orange juice). At one point, Cassidy stole a bag from a fan at ringside and threw it into the ring, despite the fan’s attempts at stopping him. As the referee returned the bag to the fan, Cassidy spit orange juice in Ridge’s face. Ridge fought back and headed to the ring apron. Cassidy countered and threw Ridge from the apron, to the floor, and onto the nearly full bottle of orange juice. In what can only be described as a Gallagheresque moment, the orange juice exploded and covered the entire first row ringside. The match ended with Ridge getting the pinfall but, I missed the exact finish since I was drying off from the OJ explosion.

A quick mop up and towel dry of the floor (well, not really dry, just slippery yet sticky) before the next match.

In the first of our two Main Events for the evening, “SHIMMER Academy Head Trainer” Daizee Haze faced “The Alluring and Exquisite” Rayna Von Tosh. Rayna Von Tosh was the young lady who did ring announcing for the last JAPW WD show. Rayna got a lot of good offense in, with a series of armdrags, and by working on Daizee’s arm. The two women even took it outside the ring (which in itself was dangerous thanks to the great OJ explosion from the previous match). Daizee did slip on the wet floor while trying to get back in the ring. Once back in the ring, Daizee hit her heart punch and Mind Trip (the only thing I don’t like about Haze.. her finisher) for the pin.

The second Main Event featured “ROH Academy Head Trainer” Delirious vs. “The Cuban Crippler” Ricky Reyes (refereed by ROH Official Paul Turner). What can I say about a match between two of the best? Delirious was ridiculously over, as expected. Reyes was great as the heel. Reyes took early control of the match but Delirious fought his way back for the victory. After the match, Delirious demanded Reyes shake his hand. Reyes obliged with a low blow. The faces cleared out of the locker room to the aid of Delirious.

Greeting the crowd, as they exited the building, were Jamilia Craft and Bobby Dempsey who thanked everyone for coming and gave out candy.

Anyone who knows me, or has ever read any of my show recaps, knows I am a stickler for the little things. I like storylines that make sense or that have some kind of follow up and conclusion. I like logic. I like matches that not only showcase the talent of those involved but ones that have a beginning, middle, and end. I am also not one to filter myself when it comes to telling someone (especially when they come up and ask me) that their show wasn’t that great or what angles/matches made no sense. I even like venues that have adequate parking or parking nearby LOL.

With that in mind, I thoroughly enjoyed this show. Every match was solid. While one seemed to drag on a little longer than necessary, it didn’t have me wanting to go for a walk or browse the merchandise stands just to get away from having to watch it. All the wrestlers on the show seemed genuinely happy to be there and even more grateful and appreciative that the fans came out to support them. No one spent an exorbitant amount of time on the mic trying to put themselves over. In fact, the only ones who spent any time on the mic were those who should have! (Like Agent Sly Stetson). The venue, as I mentioned at the beginning of this recap, was in a good location and had plenty of free parking. The car ride home, for the first time in a long time, did not consist of Ron and I talking about wasted time, bad booking, or egos. The majority of our two hour ride was spent discussing how enjoyable the show was. That is rare. The only thing I would like to see change would be the start time. Even a 3pm start would make it a little easier for those who have to travel long distances to make it home at a reasonable time. Hell, if the only thing I could find wrong about this show is the start time, then Pro Wrestling Respect must be doing something right. Let’s hope they continue on this path.