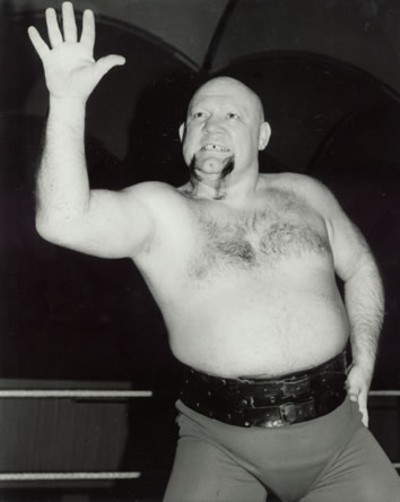 Adrian Street wrote: I first met Crusher Mason in the early to mid 60’s – a meeting I’ll never forget. ‘Dangerous’ Danny Lynch was the first one to rip-off ‘Mighty Chang’ after doubling his weight up to about 350 pounds on steroids. I hadn’t seen Danny for a couple of years, when one evening as I was approaching the arena that I was wrestling in that night I was passing a coffee bar and saw the back of Danny’s big bald head as he sat at a table drinking coffee. I entered the coffeebar, crept up behind him and shouted, “Where have you been hiding all this time, you big fat bastard?!” and slapped the back of his head as hard as I could in emphasis. Can you imagine my surprise when this human mountain turned around and I was caught in the full blast of a pair of hostile eyes glaring at me out of an angry face I had never seen before in my life! “Oh – oops! Sorry,” I stuttered, “I thought you were Danny Lynch.” The savage face before me that would have frightened King Kong melted into a friendly smile and big Crusher Mason replied, “Sit down Adrian, can I buy you a coffee? – I’ve been a fan of yours for years.” – Phew!!!!