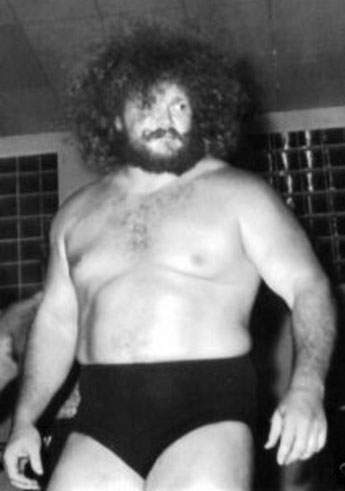 Also Doug Gilbert was one the first ( possibley the very first) to body slam Andre the Giant in Montreal Canada and defeating the giant in that match. While Andre was tangled in the ropes, Doug Gilbert then Drop kicked the Giant through ropes to the floor, however, andre’s foot remain tangled hanging him upside down outside the ring for the count out.

Doug would also wrestle in prliminary bouts as ” Red Beard” then return masked for the main event as ” The Pro” in the same night. a lot of people never knew that.

Robert Louis Howell wrote: In September 1969: The Professional scientifically destroyed El Diablo (Inferno #1 possibly Frankie Cain) in an extremley colorful first match of the first round of the first GA TV title tournament held on Atlanta Wrestling TV. Diablo was on hiatus from the Infernos while the other one was injured and was teaming with Paul Demarco under Homer O’Dells management. The Pro wore Diablos right leg down to submission and scored a good first round win. Two weeks alter in the second round the Pro was DQ ed for pile driving Assassin 2 (Hamilton) — The Assassins won a handicap match the next week from the pro when Renesto kicked him in the head between falls. The stipulation was loser unmask and the Pro was revealed to be Doug Gilbert. The very next week Gilbert regained hi GA heavyweight title form Paul Demarco and never really lost it but was injured when the Assassins broke his neck after defeating him and El Mongol. And the Feud went on.

It should be noted that the second round of the handicap match that unmasked The Professional ended in a No Contest between The Pro and Tom Renesto. Since The Pro did not beat both Assassins but only Hamilton in round one he was obliged to unmask without actually losing the match. The Assassins of course claimed this as a technical victory. In a was it was.

June 27, 1969 Atlanta: In a Mask vs Title match The Professional and El Mongol beat the Assassins for the GA Tag Team Title. The Professional had vowed to unmask if he did not win the title.

1971 The Masked Professional debuted in Los Angeles winning the annual 22 Man Battle Royal beating Rocky Johnson in the final. The Pro was photographed throwing powder in Johnsons eyes. The Pro then teamed with Kinji Shibuya and bet his mask and the $11.000 form the battle royal against Fred Blassies hair. The exact result of the Blassie match is unknown. Does anyone out there recall?

In 1972: Doug Gilbert & Curtis Smith debuted as The New Infernos defeating the west coast team of Pantera Negra & El Sicodelico. They would later win the Georgia Tag Tam titles from Eddie & Mike Graham. They would lose and re-win the titles to Mr. Wrestling II & Bob Orton Jr.. JC Dykes, their manager would later dub them The Super Infernos.

The Professional and Tex Mackenzie beat the Super Protege and Big Tex the same night the Assassins and the The Super protege unmasked the Super Assailants and Mario Galento. In the course of the match Big Tex was unmasked as Stan Frazier, This took the edge off the defeat of the Super As later that night,