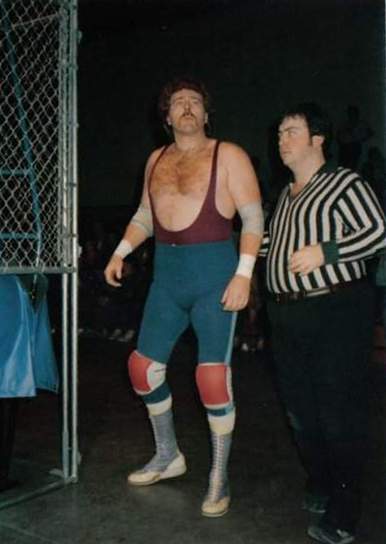 Stanton broke in to the wrestling scene on the East Coast of the United States in the late ’70s. It wouldn’t be until 1979 that he made his first appearance on the Stampede circuit, where he worked several times up until 1984 as a mid-card heel and occasional babyface. He also wrestled underneath a mask and was known as “The Mercenary.”

Although Stanton was well-known on the wrestling circuit during the ’80s, not a lot has been written about him. Perhaps that was because he never spent much time marketing himself; he preferred to wrestle. Mike Dupre, a wrestler who worked with Stanton during the ’80s for All-Star Wrestling in British Columbia, suggested that celebrity seemed to mean less to Stanton than putting on a good match.

“The problem with guys like Stanton is that they are incredible hands, but not as good at getting a major nod in a bigger territory, particularly in that day and age.” said Dupre. “They didn’t get remembered as fondly as other, glitzier wrestlers who really couldn’t work their way out of a paper bag by comparison.”

Dupre described Stanton as a journeyman, adding, “because of the nature of pro wrestling, the cream doesn’t always rise to the top. He could work anyone and have a bout, perhaps he just lacked that something extra to get over, or more than likely he just wasn’t as good of a politician.”

Dupre said that Stanton’s biggest sin was that he was just a nice guy. “He just liked wrestling and only strove to make a living and have a good time. He wasn’t a jerk or a double dealer and quite frankly the majority of guys on top have to be that way to get on top and stay there. He simply wasn’t like that.”

Marty Goldstein, a wrestling promoter and current radio talk show host, met Stanton several times during the filming of a documentary on the West Coast wrestling scene. “Tom was a very respected worker among his peers and was even more respected for being a stand-up guy who always helped a brother,” Goldstein said.

Stanton and his wife had some of the cast and crew of the film at his house on the afternoon of a wrestling show. “It was a real beautiful day and they were such a nice family,” Goldstein recalled. “It was a — well, I have a lot of good memories of that trip and of the time with Stanton.”

Tom didn’t publicize a lot of information about his family, but he did marry the daughter of a golf pro, a sport he enjoyed very much. Mike Dupre mentioned that he liked the sport so much he may have broken into a high school one night to get at the whiffle golf balls. “We broke into the equipment room in one high school up in some godforsaken place in northern BC and got out the whiffle golf balls and lobbed them out to the street while people were walking down the sidewalk.”

That was the side of Stanton many of his wrestling friends can remember the easiest. “He was so laid back and his ribs were sly,” Dupre recalled. “Like giving me morphine sulfate for a headache (he had a legit back injury and this was prescribed for him). I still had the headache, but it didn’t really matter. It’s funny to look back on now.”

Being around Stanton was always fun, even when things didn’t go as planned, Dupre added. Once, while wrestling for All-Star Wrestling on a televised event, a loser-leaves-town match was scheduled. Stanton asked Dupre if he was okay with this match. “I was honored to work him,” Dupre recalled. “He gave me 85% of a two-minute bout, and then my former partner Sonny Myers trips me from the outside, and Elton drops the elbow and pins me. He thought I was going to lay face down, but I rolled over and he potatoed me right in the eye and about totally KO’d me. He was pretty upset, but I thought it was funny.”

Dupre commented that he was just an awesome guy to have around and won the respect of everyone he met. “Tom was just an easy-going, friendly, down to earth person who just enjoyed what he did, and liked the people he worked with. He had no ego, whatever made the program work, he’d do – he was a total pro. If I was a promoter, I’d want a whole crew of Tom Stantons.”

Wrestler “Playboy” Doug McColl recalled an hour-long match Stanton was part of that left quite an impression with him. “He did this 60-minute match and tore the house down,” McColl said.

In Vancouver, he got into an accident with McColl and the car they were driving in was perched over a cliff. Tom was injured in that crash, but as was his style, returned to work shortly thereafter, wearing a hood to conceal some of his injuries. “He was just a hell of a worker,” McColl said.

The highlight of his career may well have been a tour in Japan when he worked for the International Wrestling Office in 1980 where he teamed with Mongolian Stomper (Archie Gouldie). He returned home and continued his wrestling career and would wrestle until the late ’80s when he retired from the sport, opting to settle down in the sleepy Okanagan area of British Columbia. It was there that Stanton had an unfortunate stroke and soon after, fell ill with cancer. He spent his final days with his family as quietly as he had wrestled.