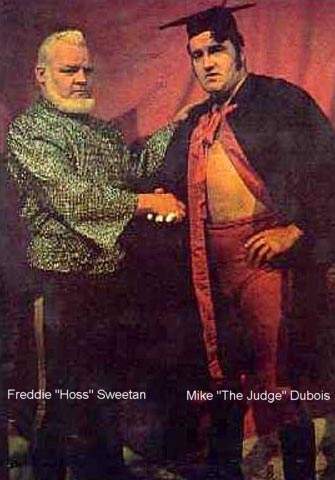 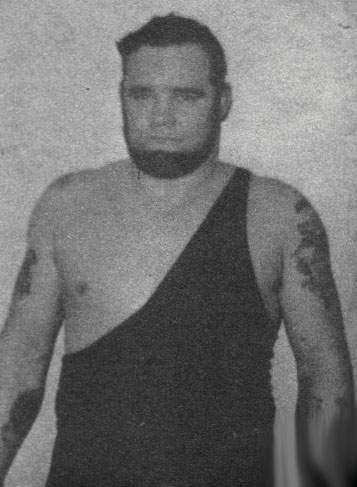 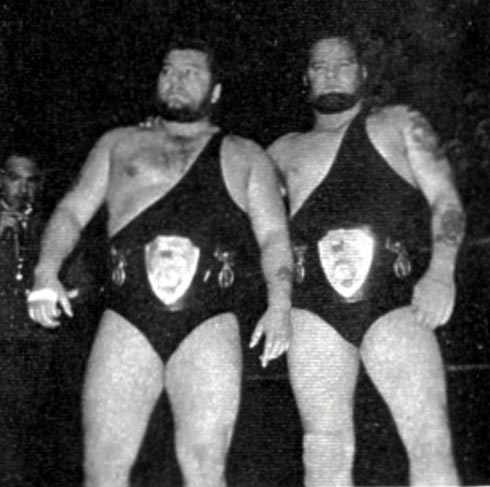 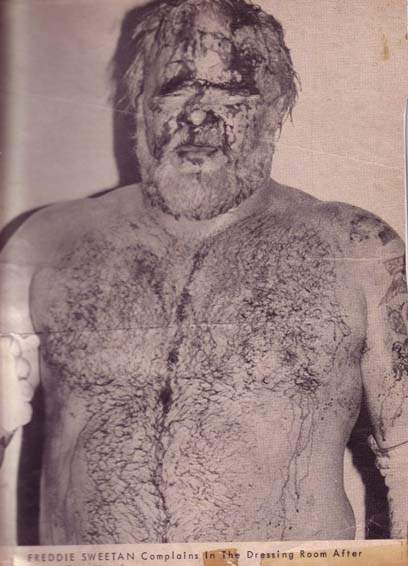 Former pro-wrestler Earl Black wrote: I was Freddie Sweetans tag partner one night in New Glasgow, Nova Scotia. We were on last, the main event, and Freddie liked to wait until the fans had gone before leaving the arena. This helped to prevent any confrontation with the fans. I took my time getting ready. When we were showered and dressed, I looked out of the dressing room to find only two people, the two biggest men I have ever seen in my life. They looked like twin ogres. They had huge black beards, jeans, and lumberjack coats, with a big black cowboy hat each. They were well over seven feet tall, broad as a barn door, and wild looking. And they were blocking the only door we could go out of. I expected trouble, and told Freddie. He decided to wait a bit longer, so we gave it more time. By now it was getting late, and we had a long drive back to New Brunswick. Freddie was a bit braver than I was, he decided to approach them and tell them to clear off. Freddie strode up to them and said “What do you want?” One of the giants said “Can we carry your bags, please, Sir?” We gave them our bags, and left the arena, the giants roaring at the remaining crowd; “STAND BACK. WRESTLERS COMING THROUGH!” It must have given them a buzz to be associated with the wrestlers in front of the fans. Why they were not wrestlers themselves, I dont know. Freddie gave them both an autographed photo, and called them loudly by name so the fans could hear, just to make their night. That’s the kind of guy Freddie was. Freddie Sweetan was the nicest guy I met in wrestling. Sadly, I heard later that he fell asleep smoking a cigar, which caused his demise.

Former pro-wrestler Earl Black wrote: The hottest match I ever saw, was the bare knuckle tag boxing match between brothers Rudy Kay and Leo Burke, and the team of Freddie Sweetan and Justice Du Bois. It took place on a hot summer night at the end of the season in the Maritimes, in Halifax, Nova Scotia, in 1972. Du Bois really was a judge, and Sweetan was a giant ex-paratrooper. The story was that Du Bois had beaten up Leo Burke in a bar, prompting ex-boxer Rudy Kay to challenge Du Bois to a bare knuckle boxing match. Du Bois said he would fight him, if he could choose a partner. The partner turned out to be the 6ft5 350lb Sweetan, and Leo Burke became Rudy’s partner. I wrestled Bobby Kay in an earlier match. Animosity had been building for months, Du Bois and Sweetan were hot, and Rudy and Leo were local heroes, as they were from near Moncton. Not only was the stadium sold out, but ten thousand people turned up outside and listened to the deafening noise from the fans inside. The ban on bare knuckle fighting was overcome by wearing tape on the hands. The match was furious, brutal and very dirty, Du Bois biting Rudy and stomping him with his jackboots. There did not seem to be any rules, except last man standing wins. Sweetan beat hell out of Leo and made him bleed profusely. Leo finally managed to tag Rudy in, who out-boxed Sweetan and Du Bois, soon it was a bloodbath. The fans were on their feet screaming through the whole match, which lasted about 25 minutes. When Rudy knocked out Du Bois, the whole town exploded. It was an experience I will never forget.