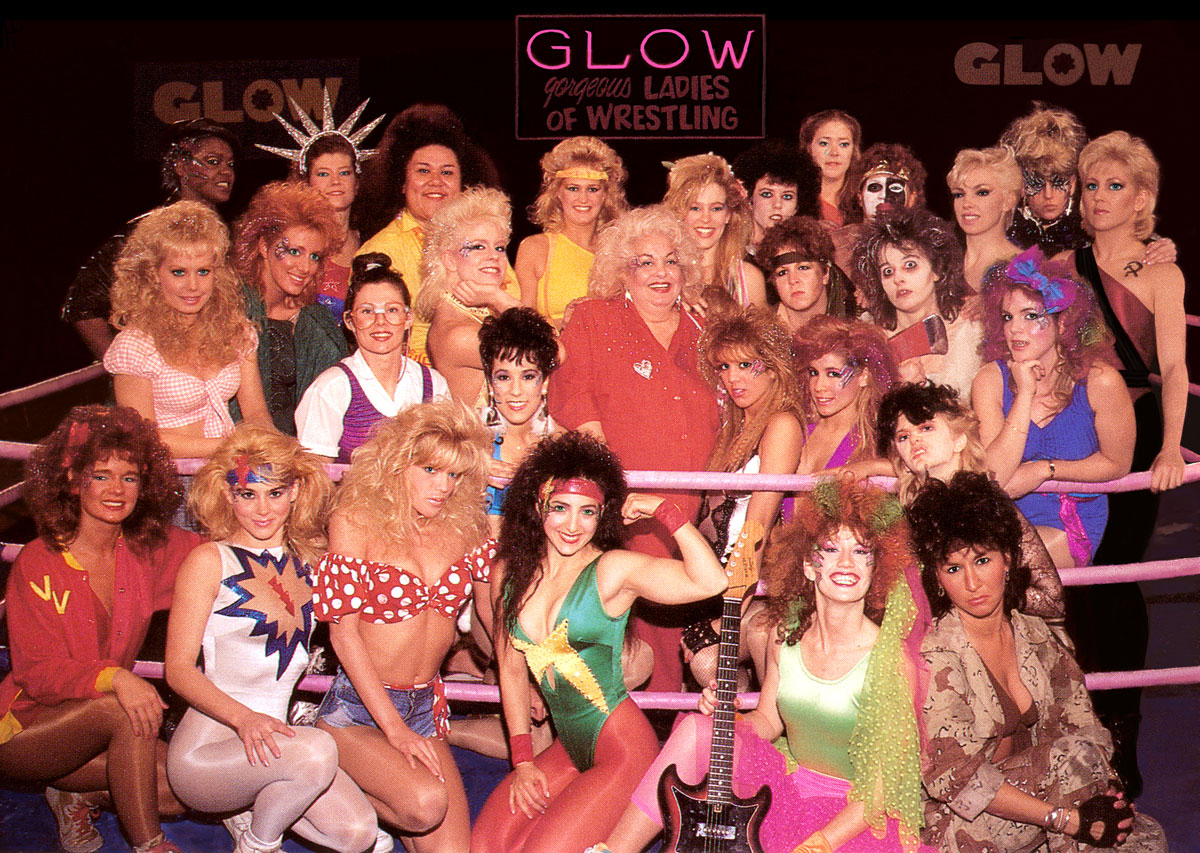 Gorgeous Ladies of Wrestling, also known as GLOW or G.L.O.W., was a professional wrestling promotion for women, begun in 1986 (the pilot was filmed in December 1985) and continued in various forms after it left television. Colorful characters, beautiful women, and over-the-top comedy sketches were integral to the series’ success. Most of the performers were actresses, models, dancers, and/or stunt women hoping to get into show business through wrestling.

GLOW was created by Matt Cimber as an evolution of a somewhat different original concept by David B. McLane. That began as an aftermath of Jackie Stallone‘s physical fitness gym for women only, Barbarella’s. David and Jackie promoted the girls for the entire running of the program, while Matt Cimber, very typically, remained out of the spotlight, with two notable exceptions. Mando Guerrero trained all of the girls, initially.

The syndicated GLOW TV show was produced for four seasons (1986–1990) from the Riviera Hotel on the Las Vegas Strip. During the casting for the pilot, not all of the women were taking it seriously, so Mando Guerrero put one woman in a submission hold and made her cry.  They cast twelve girls for the show and trained them for six weeks prior to the shoot.  They wrestled approximately eight matches per show, which eventually was sold. Some of the women moved to Las Vegas to continue working with the promotion.  The show itself differed from Vince McMahon‘s World Wrestling Federation in that they had actual seasons where some wrestlers were dropped, changed, or added before the new season began. Each season consisted of 26 episodes that were each rerun once to complete the year, with a total of 104 episodes produced.

Steve Blance was the senior referee in season two before becoming GLOW’s “commissioner” in seasons three and four. He was always the recipient of a GLOW Girl beatdown in season two. Johnny Cafarella (as “Johnny C.”) hosted seasons 3 and 4, was the figurehead owner (buying David McLane’s “interest” in a storyline) and also served as company manager after the departure of McLane in 1987. Jackie Stallone (Sylvester Stallone‘s mother) was the figurehead owner and manager of the Good Girls, and Aunt Kitty (Kitty Burke) was the manager for the Bad Girls.

Each of the GLOW performers had her own rap song (personalized lyrics using the same backing track). It was shown on videotape prior to that wrestler’s match. Similar to other wrestling promotions’ use of wrestler-specific entrance themes, this gimmick may have been influenced by the Chicago Bears‘ “Super Bowl Shuffle“.

David McLane also was behind three subsequent women’s wrestling leagues, Powerful Women of Wrestling (1986–1990), Ladies Sports Club (1990–1991) and Women of Wrestling (2000–2001). Johnny Cafarella promoted a similar show in 2003 called CRUSH along with Steve Blance. The CRUSH concept was revived in 2008 by Cafarella for the Wrestlicious promotion. The GLOW name is currently owned by Ursula Hayden, who portrayed Babe the Farmer’s Daughter during seasons 3 & 4.

GLOW is still in existence, though not associated in any way with David McLane. It was revived by the Riviera Hotel & Casino, where it was originally filmed, in 2001. As the son of the director, Matt Cimber, Tony Cimber (the youngest child of the 1960s American sex symbol Jayne Mansfield and a half-brother of actress Mariska Hargitay), started on the show playing a character called “Nature Boy” and was led around the ring on a leash by a female wrestler named, “Jungle Woman”. In April 2012, GLOW returned to Las Vegas for a show that reunited former GLOW girls Roxy Astor, Hollywood, Babe the Farmer’s Daughter, Gremlina, Lightning, Thunder Bolt, Melody Trouble Vixen, Ashley Cartier, Godiva, Daisy, and Corporal Kelly. The show also featured new GLOW girls, including Sara Deathray.

A documentary film entitled GLOW: The Story of the Gorgeous Ladies of Wrestling was completed in late 2011. The film was directed by Brett Whitcomb and written by Bradford Thomason, and features the music of ESG.