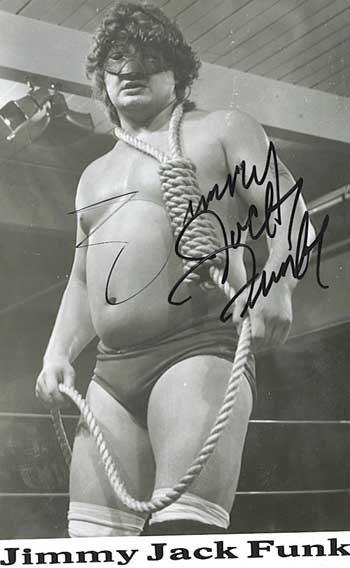 Michael J Salyers wrote I was looking through your site reading up on some of my favorite wrestlers I grew up watching and came to Jesse Barr aka Jimmy Jack Funk . I used to watch Florida championship wrestling every saturday morning and saw there is alot of info missing on your site as far as championships he has held . At one point Jesse would parade around looking like an idiot because he was the co-holder of the US tag champs as well as the Florida championship which he won from Lex Luger by using a hand full of tights and he was also the US TV champ which he won from Dusty Rhodes in a non-televised event . He was a US Tag Team Champion with Rick Rude but when they lost the championship , Rude turned on him and started tagging with Manny Fernandez and that team went onto Jim Crockett’s WCW and became world Tag Champs. This is about the time Jesse hit a losing streak in Florida and ICW and was made Jimmy Jack Funk , side kick to the Funk Brothers and all 3 faded into obscurity after a short run in the WWF / WWE . Not trying to be an ass just thought the info. may be useful ….