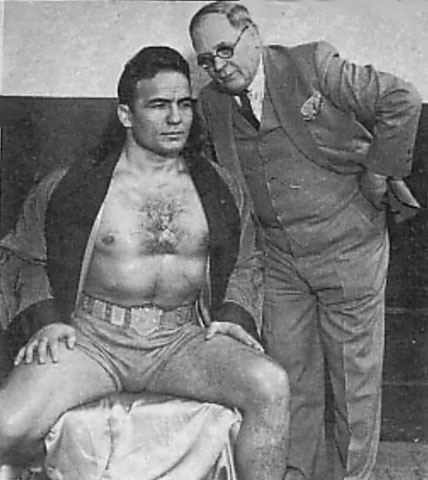 Dale Pierce wrote: Jim Londos wrestled the first main event at the Phoenix Madison Phoenix Garden when the building was built in September of 1929. The building wa soficially opened a few days before the wretsling bout ,with a boxing card and over 50 cars had their tires slashed (possibly a rival promoter trying to keep fans from going to the shows as wrestling and boxing was being held in another arena at the time).

A few weeks later, Londos and Dick Davencourt caused a riot in the main event that resulted in several fans being arrested. Both wrestlers were suspended by the state athletic commission. Londos simply let a front man run the Garden shows where he was involved with the officew and wrestled on the Indian reservations outside the Phoenix city limits, where the commission held no juristiction, until a settlement against the suspension was made..

Jim Londos was once Worshipful Master (roughly akin to a Grand Pubah so to speak) of the Matincock Masonic Lodge in Oyster Bay, New York, the same lodge once attended regularly by Teddy Roosevelt.