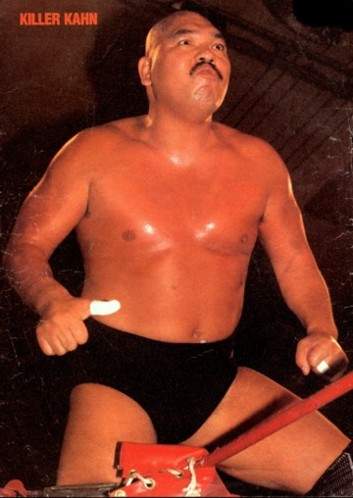 Just to add a little more info on Killer Kahn. I’m pretty certain Kahn didn’t start spitting green mist until he re-entered the WWF in the later 80’s. Kahn also did not use his infamous oriental spike in the WWF. Kahn did not use mist in World Class which was before he re-entered the WWF. Kabuki was using mist in the early 80’s which means Kabuki was using it well before Kahn. Also Killer Kahn feuded with Out Back Jack during that late 80’s WWF stint. If I remember correctly I believe Kahn’s finishing move during his late 80’s WWF stint was a knee drop from the top rope and his manager was Mr. Fugi. Kahn’s late 80’s WWF stint was so short that to my knowledge he did not appear on a PPV ; however I think he did receive a few untelevised title shots against Hulk Hogan. Also Kahn wrestled barefoot during his late 80’s WWF stint despite wearing boots for a majority of his career.