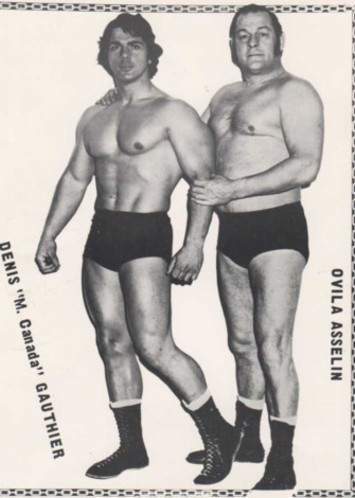 From the files of Greg Oliver: Tony Lanza discovered Ovila Asselin working out at a beach near Montreal. The 6-foot-1, 225-pound Asselin had been Mr. Canada at 17. Lanza took the bodybuilder under his wing and trained him for his debut in 1948. Asselin was a mid-level star, known for his dropkicks and the Irish whip along with his sculpted physique. “He didn’t wrestle with the light-heavyweights, but he was more that type. He didn’t go out very much. He stayed in the province of Quebec,” said Bob ‘Legs’ Langevin. One of his best friends was Eddie Auger, the uncle of Johnny and Jacques Rougeau. He worked into the early ’70s before calling it quits. Asselin then bought a hotel and restaurant outside of Montreal. He passed away a few years ago.