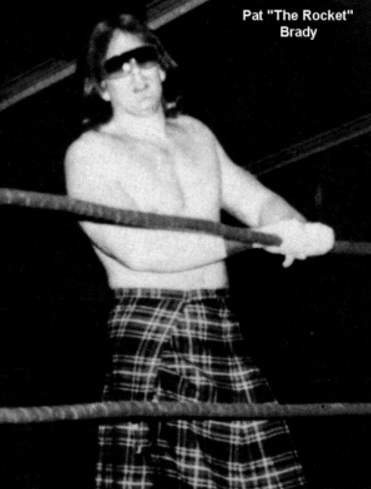 Pat Brady wrote again: One thing I neglected to mention was that it was Al Tomko, promotor of All-Star Wrestling in Vancouver, who gave me the ‘kilt’ gimmick in 1985. He told me, ‘Hey, I put the kilt on Piper in Winnipeg in the early ’70s and look what it did for him!’ Good enough for Piper, good enough for me. I used the kilt mainly in working for Canadian promotions.

I retired after a serious knee injury in 1997. Since then I’ve worked as a Massage Therapist and Yoga Instructor. This line of work has been most therapeutic for me, but I still carry in my bones and soft tissues the wear and tear of the ring, the road and the gym.