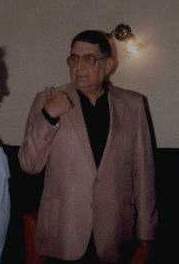 Dale Pierce wrote: In his long career, Melby was a mainstay in the west, who wrestled the likes of Gorgeous George (whom he gained a win over) and Lou Thesz (whom he did not defeat) Melby ran a succsessful solar heating business for years and also worked some weekends as a train robber, “robbing” the train at the now defunct Legend City Amusement Park on the outskirts of Phoenix. Melby frequented boths sides of the border, usually teaming with Rudy Navarro. Together, they caused numerous riots in the smaller rings. Melby always liked to tell of how, in the middle of a shower at a tv taping in Mexico,an angry producer shut all the lights off on him in the locker room. Melby created light by piling old chairs and other junk into a stack and starting a fire. Melby has been confused at times with another wrestler known as Bill Melby, who was no relation. Melby retired in 1986, after a tag team match in Phoenix where he and Reggie Parks took on the team of Tony Hernandez and The Mongolian Stomper. During the 1990s, Melby gained the reputation of “Mr. Comeback” when he survived a serious stroke, a “terminal” bout with cancer and a heart attack. Melby was one of the honorees at the 1997 oldtimer reunion in Phoenix