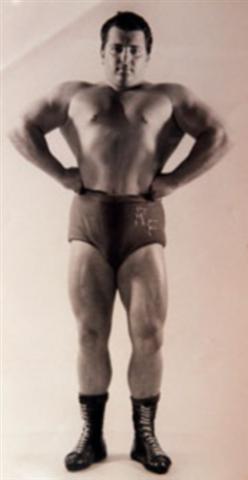 Frank Earl wrote: I knew Ronnie Fury well,he was a powerlifter who started wrestling for Hal Morgan in Sydney in the sixties. He was a larger than life character, always amusing. He was slightly deformed, in that all his fingers were the same length, and he had a speech impediment. When he said “sheep,” it came out “theep.” On one famous occasion, he was rammed from behind by a careless driver in Sydney city centre. Ron asked the other driver if he had a driving licence, and when it was handed to him, Ron ripped it up and dropped the pieces on the floor and said “You bloody well thouldnt have one.” He was a really laid back powerlifter. The other lifters would be in the dressing room taking vitamins and health drinks. Ronnie would be in the pub. When everyone else had lifted, Ron would put ten pounds more on the bar than the best lift, and win the contest. He held the Australian squat record for many years. …