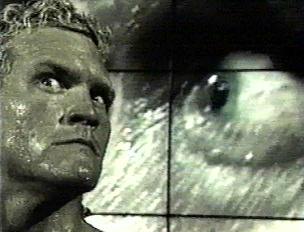 The intense action, the wall-to-wall packed crowd, and the announcement of PWU joining Philadelphia-area TV at the New Alhambra Arena made Pro Wrestling Unpluggedâ€™s â€œIron & Steelâ€ a night to remember.

One-half of the New Jersey Independent All Stars, JC Ryder, was met with the crowdâ€™s regular disgust for the state of New Jersey.Â  But the fan-favorite deaf wrestler Zach McGuire was met with roaring approval.Â  In a great start to the night, this fast paced back and forth match-up stayed hot from start to finish.Â  In the end, the technical ability of McGuire caught Ryder in a clutch pin.

Despite the crowd solidly behind â€œThe REAL Pitbullâ€ Gary Wolfâ€™s hand-picked protÃ©gÃ©s Pete Hunter & Aramis, Team P.I.T. had very powerful obstacles to overcome in Gangrel and Billy Blade.Â  After a display of power and experience from Bloodline keeping the power of Hunter & agility of Aramis down, it was Gary Wolfâ€™s teaching that shone through.Â  Billy Blade attempting a cross body was caught by Hunter, who hit The Completion for the finish.

* Z-BARR rolls up DEVON MOORE for the pin

Only encouraged by the PWU fansâ€™ hatred of him, Z-Barr was ready for battle.Â  But Devon Moore was driven his own interest in starting a path back to the PWU World Title.Â  Moore displayed intense offense, keeping Z-Barr down almost the entire match.Â  But Mooreâ€™s own momentum allowed Z-Barr to keep him down for the pin.

Matthews started out saying Acid was jealous of his success and was going to beat respect into Acid.Â  Acid came out stating despite any money Matthews has made, heâ€™s just a Backseat Boyz ripoff!Â  If you want to talk about fire, these two exploded with intensity.Â  Tremendous power and agility from both men, it was shady tactics from Matthews, who hit a lowblow behind the refâ€™s back to set up for a double arm DDT for the pinfall to earn a title shot in September.

The sold out crowd was hot for both competitors.Â  Sid started by using his power to control Scorpio.Â  Never backing down, Scorpio fought back with all he had.Â  Scorpioâ€™s agility kept him just out of danger, until Sid connected with a chokeslam.Â  Before Sid could capitalize, Helter Skelter distracted Sid, allowing Scorpio to roll up Vicious.Â  None too happy, Sid beat the crap out of Skelter, only to be stopped by Scorpioâ€¦who then helped Sid slam Helter through a table on the outside.

* PWU Owner TOD GORDON announced that on August 18, PWU will return to the New Alhambra Arena where the crowd will legitimately pick who wrestles who.

* AMY LEE then confronted the next round of PWU Commissioner Idol contestants to see how they would handle her in the locker roomâ€¦and none of the contestants has kind words to say to AMY LEE.

* The sold out crowd was on their feet as THE BOSOM BUDDIES (Teddy Fine/Drew Blood) took out THE BEST AROUND (TJ Cannon/Bruce Maxwell), only to be attacked from behind by Cannon & Maxwell

Drew Blood started off against The Best Around.Â  Quick tags and double teaming kept Blood under T.B.A.â€™s control.Â  After a head bouncing DDT to Maxwell, Blood was able to tag a fresh Teddy Fine, who has been wanting revenge after months of T.B.A.â€™s attacks.Â  As T.B.A. went for their Lungblower Double Stomp, Drew took out Maxwell, allowing Teddy to roll up Cannon for the pin.Â  But The Bosom Buddies didnâ€™t enjoy the victory as T.B.A. attacked both men after the match.

Set as a singles match between Hawx and Kingston, Luke stated heâ€™s going to kick Kingstonâ€™s ass like The Saints kicked The Eagles ass twice last season.Â  But John McChesney headed to the ring saying he didnâ€™t come to Philly to be a â€œRiddlerâ€ and made it a three way dance.Â  All three tried to take each other out, finally leading Kingston hit a backdrop driver on McChesney, leaving Kingston open for a Flatliner from Hawx.Â  For a finishing touch, Hawx grabbed Kingstonâ€™s tights for the pin.

After clearing the ring of Hawx and McChesney, â€œThe New Batmanâ€ said heâ€™s got respect for Kingston and has a huge announcement.Â  Pro Wrestling Unplugged is going to be broadcasted into over 300,000 homes this fall in the Philadelphia area on television!

Detox started with his playful games, disguised as a Security Guard checking the ropes, surprising Lucky out of the ring.Â  If you want to talk about action, Lucky and Detox went hold for hold until Lucky used some dirty New Jersey tactics.Â  But Detox hit a double knee then a springboard to the outside.Â  Lucky again tried to cheat, but Detox hit a double underhook powerbomb and despite tweeking his knee,Â  climbed to the top, where Lucky backed into the ropes, causing Detox to fall & giving Lucky a pinfall victory.

* In a STEEL CAGE where the winner had to escape the cage, MESSIAH defeated ADAM FLASH.Â  But FLASH was the one left standing.

After four months of mind games, Flash had nowhere to run to & took repeated shots to the head and even powerbombs against the steel cage wall from Messiah.Â  Flash regained control, eventually facewashing Messiah with a chair to bust him open and hit a legdrop from the top of the cage.Â  When Flash tried to escape from the cage, Messiah climbed up after.Â  As they battled on top of the cage, Flash repeatedly bashed Messiah in the cage, sending him flying through a table on the outside to give Messiah the inadvertent victory.

For almost a year, The SAT & All Money Is Legal have been in battle over the PWU Tag Titles.Â  Now locked inside a steel cage, these men punished each other.Â  The SAT took early control by damaging double team action.Â  But All Money Is Legal fought back with amazing agility.Â  In a flurry of flying headscissors, hurricanranas, and enziguris, K-Pusha hit a flying facebuster from the top off the cage on Joel.Â  But as K-Murda made his way to the opposite platform, he was caught by both members of The SAT with a Spanish Fly from the top of the cage!Â  But The SAT werenâ€™t satisfied with that as they beat down All Money Is Legal after the match, as well.

For the latest on PWUâ€™s return on August 18 to the New Alhambra Arena where the fans make the matches or about Pro Wrestling Unpluggedâ€™s TV debut, check out ProWrestlingUnplugged.com for the latest.