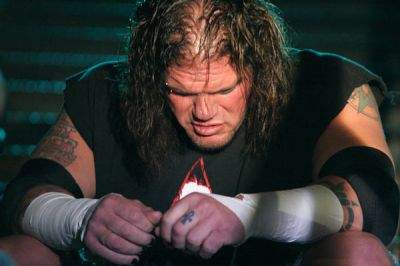 There’s something unique about the of the popular dvd series “Guest Booker”…it doesn’t feature an actual booker. Instead, sitting in the booker’s seat is Raven, a wrestler largely regarded as having the ability to successfully book a federation. And for these hypothetical purposes, he does just that.

In Kayfabe Commentaries’ latest edition of the series, Raven is put in charge of the main event angles precipitated by Scott Hall’s and Kevin Nash’s fictitious arrival in ECW in June of 1996. The dvd is predicated on the fact that Hall and Nash choose to give a bump to the boys and girls from Philly, rather than going to WCW. Kayfabe Commentaries co-owner Sean Oliver says that the detail in which Raven books necessitated the disc be centered entirely around that single element.

“We’d still be shooting if we gave him anything else to do,” Oliver jokes. “This dvd covers his booking philosophies and beliefs totally, just as we do with all the bookers we feature. The series is a total portrait of that booker’s individual creative process. We’d shortchange that by cramming a ton of angles in there just for the sake of just seeing ‘what he would do.’ The series is more of a total picture of each individual profiled.”

Raven starts the disc discussing his booking ideals and how they relate to what ECW was, as well as wrestling in general. Then after moving on to the series’ trademark booking exercise, he moves Oliver out of the host chair, takes over the booking board and basically the entire show. Oliver says he didn’t mind.

“I put up my feet and enjoyed the show. Actually, what choice did I have?”