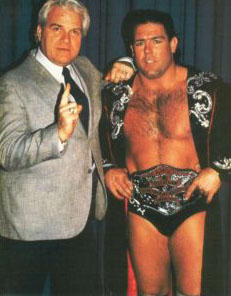 Wrestling Weekly airs every Tuesday at 8pm Eastern at www.wrestlingweekly.com

Doc and Les discussed the following with JJ Dillon:

– The Cauliflower Alley Clubâ€™s NWA Wrestling Fanfest on August 10-12th in Charlotte where JJ will be attending a wrestling convention.

– The lasting memories which fans have of the Four Horsemen and pro-wrestling in general.

– JJ Dillon spoke in some detail about meeting the fans and talking with them, signing autographs and the Q&A sessions.

– Chris Benoit, physiques in pro-wrestling which JJ highlighted that in WWE wrestlers need to have a â€œcertain lookâ€ and states that because of this, â€œsome of them have lost their originalityâ€.

– Doc mentioned JJ being one of the top storyline writers for WWE, before becoming WCW Commissioner. Dillon replied saying that he began working for Titan Sports (WWF) in 1989 and that they had two syndicated shows (Superstars & Challenge) and three different groups of wrestlers touring. JJ continued by saying it was a challenge and that Vince McMahon and Pat Patterson were a â€œtwo man teamâ€ and he was invited to join them both.

– JJ noted that he started in the business as a referee for Vince McMahon Sr. and highlighted that he learned a lot working at WWE and have worked with wrestling promoters – Vince McMahon Jr. and Vince McMahon Sr., Jim Barnett, Jim Crockett Sr., Fritz Von Erich and Sam Muschnick. He continued by saying â€œgoing to New York was like going to graduate school, learning moreâ€¦it was a great experience for meâ€¦â€.

– Doc asked with todayâ€™s hectic schedule for WWE, would JJ Dillon have taken the same job today. Dillon responded by saying he wouldnâ€™t because â€œthe wrestling business is such a demanding businessâ€¦you have to worry about twelve to sixteen guys on the card or if youâ€™re in the front officeâ€¦sixty to seventy wrestlers so it becomes a 24/7 job and that requires a lot of energyâ€¦â€

– JJ making an appearance for Ring of Honor and talking about being in smaller arenas, which he noted back then â€œwrestling came to the peopleâ€ in comparison to WWE today performing in larger arenas

– Dillon spoke about ROH in more detail and that he had â€œgreat respect for Jim (Cornette)â€. He continued by saying wrestlers in Ring of Honor spoke with himself and Jim Cornette about wrestling, which Dillon highlights â€œâ€¦renewed my faith in some of the current wrestling talentâ€œ.

– JJ was asked by one of the wrestling weekly listeners who he thought was one of the best horseman. Dillon replied by saying â€œthe original Four Horsemenâ€ noting they will â€œalways be specialâ€¦Flair, Tully, Ole and Arnâ€
– Another question is should heels be hated and feared or charismatic like Ric Flair. JJ responded noting â€œI donâ€™t think thereâ€™s a rubber stamp formulaâ€¦it has to do with the individual and their personalityâ€¦â€. He then spoke about heels in more detail, like The Sheik.

– JJ is then asked by another wrestling weekly listener if Magnum TA was going to get a title run or a program with Ric Flair. Dillon notes that eventually Magnum would have been a candidate to become World Champion.

– JJ Dillon was then asked about the luxuries given as a member of the Horsemen. JJ replied, â€œI felt we were treated very well, we had a brutal schedule, touring around the countryâ€¦Jimmy (Crockett) was smart enough to show his appreciation by making things a little easier whenever he couldâ€

– Another question from the Wrestling Weekly chatroom is did JJ choose Oliver Humperdink to replace him in his managerial role when he left the Florida territory. â€œNo, it wasnâ€™t my decisionâ€¦I had known Oliver Humperdink a long, long time and heâ€™s another guy I have great respect forâ€¦â€, Dillon said.

– JJ is then asked how TNA could be on a more competitive level with WWE. Dillon responds by saying that he couldnâ€™t give a simple answer and gave his thoughts on TNA in more detail, emphasising â€œThey (TNA) will never be better than WWE at what they (WWE) doâ€œ.

JJ Dillon is then thanked by Doc & Les for being a guest.

For more on James J Dillon visit his official website at: www.jjdillon.com and he has an autobiography too called â€œWrestlers Are Like Seagullsâ€

For more on the NWA Wrestling Fanfest visit:
http://www.caulifloweralleyclub.org/Events-Main.html

Next week’s guest will be ‘The Assassin’ Jody Hamilton.