Home / Podcasts / Recap of Ricky Santana on In Your Head

Recap of Ricky Santana on In Your Head 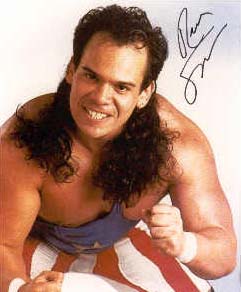 Ricky Santana Interview Recap
by Neal JonesRicky Santana was the guest on the November 21st edition of the In Your Head Wrestling Online show, hosted by Jack, One Inch Biceps and Barbie Richards at http://www.inyourheadonline.com

Ricky was here to talk about the Planet Championship Wrestling Card November 24th at the Robarts Arena in Sarasota, Fl. headlined by Sabu vs Eddie Colon and Apollo vs Brent Dail plus Fidel Sierra defending the Cuban title vs Glamour Boy Shane and so much more including Kip James vs. Big Vito, “The Devil” Kevin Sullivan vs. King Haku, The Nasty Boys vs. Norman Smiley and Hack Meyers, Barry Horrowitz vs. Ricky Santana and many other stars such as Rico Suave and Chavo Guererro. For more information please visit http://www.planetchampionshipwrestling.com or call 941 580 1861

Ricky is welcomed to the show, and wished a happy birthday.

Ricky says this show will be like a reunion tour with stars from WWE, WCW, Puerto Rico and so many other places.

Ricky talks about his first ever barbed wire match with the Sheep Herders at the Robarts Arena 25 years ago. Ricky says they put hardcore on the map before they were the Bush Whackers.

Ricky talks about the legendary Guererro family and what they mean to wrestling. Ricky goes on about working Kevin Sullivan years ago. Ricky talks about facing Eddie Colon, Big Vito and Sabu in Puerto Rico.

Jack asks the difference between the Puerto Rican and American crowds. Ricky says they like to see the old school blood and guts kick ass style. The fans are more into wrestling than they are here in the USA. He will never forget the experiences.

OIB asks what it was like working with the legend Carlos Colon. Ricky says he is the icon on Puerto Rico. Ricky says it was an honor to be in the ring with him and has a lot of respect for the family, the Colon family is a dynasty in wrestling. Jack asks if he was nervous. Ricky says it was another step in building his own name. Ricky mentions wrestling Andre the Giant in Japan.

Ricky says this will be his first time working with Barry Horowitz. Ricky says he has a lot of history in Florida Championship Wrestling.

Jack asks what’s the difference between watching wrestling live in the arena and watching on TV. Ricky says there is a whole different aura being at the arena. He talks about his dad taking him to live matches and hearing the chops and bumps.

Ricky talks about the importance of having different styles and stars from the past and future on a wrestling show.

Caller Brian asks about ghis relationship with Tito Santana. Ricky says they aren’t blood related. Ricky started his career in the then WWF, and being a young rookie Tito took him under his wing as his younger brother. Jack asks if they ever thought of doing a Santana brothers team. Ricky says it would have been an honor, because Tito had such a good career. One of Ricky’s goals was to wrestle as the Santana brothers with Tito.

Jack asks about the origin of the Barrio Brothers with Fidel Sierra. Ricky says they were the Cuban Connection for years and they wanted something more up the date. They saw it as a form of “Boyz in the Hood”. Jack asks if they thought they would get a bigger push. Ricky says they once beat the Rock N Roll Express and had a good run with the Sheep Herders.

IYH fan Chunky asks what Ricky’s favorite ECW match was. Ricky says it was vs. Luger and Sting with Fidel. In NWA it was being in the ring with Ric Flair. Ricky says that was an honor and a classic on WCW Worldwide out of Charlotte. He was in the ring for 45 minutes with Flair which was a big stepping stone in his career. Ricky talks about Ric being the guy who bought all the drinks in the bar.

IYH caller El Santo asks what current Puerto Rican stars does Ricky see rising. Ricky says Apollo has the ability. Eddie Colon has been in the shadow of Carlito and he can be a main stay. Ricky Banderas is another one Ricky see as having a lot of potential. Ricky would pick Eddie as the top of those for being a money drawer.

Ricky talks about facing Abdullah the Butcher many times in Puerto Rico. His first match with him was in Japan. Ricky wrestled many hall of famers such as Dr Death, Terry Gordy, Stan Hansen, Abby and Andre in Japan.

Jack asks the difference between the Japanese and American fans. Ricky says if you give 100% even if you lose every match the Japanese fans will respect you. If you sand bag it they will know.

Ricky plugs the show, and wants everyone to turn out and support Planet Championship Wrestling in Florida. http://www.planetchampionshipwrestling.com
Ricky thanks all the fans who have supported him over the last 25 years.

You can listen to the full-length interview along with Missy Hyatt at http://www.inyourheadonline.com and new episodes Wednesdays at 8 PM EST including this week with Amazing Kong aka TNAâ€˜s Awesome Kong.